← Unputdownable | the Dangerous Newspeak of Bookselling
I Love a Good Burger →

In lieu of attending the meeting Organizational Meeting of February 1st due to employment obligations, I would like to submit this modest proposal to the Order of Buffalo Ltd., also known as the Fraternal Order of Buffalo, aka ManNight.

Gentlemen, in the past weeks we have discussed amongst men, argued like children and been hysterically preached at by Mike, regarding the creation and evolution of the Order of Buffalo’s line of clothing.  As any of you who have followed even just this past week’s progress on Buffalo Soap Box have seen, this selection of hats and variety of logo designs presents an incredible opportunity for the Order.  It is an opportunity, not only for modest monetary gain, but for the branding of our organization and the broadening of our audience.

There is, however, one thing I have felt was lacking amidst the talk of potential products and the submission of designs, and I would like to take a moment to address this absence.

I ask you gentlemen, who doesn’t love a little piece of retro, a small slice of nostalgia?  From a throwback jersey, to a vintage car, to banging an ex-girlfriend, everyone loves a little piece of the past.  It appeals to our sense of place, our need to belong and be a part of a bigger existence.

The beauty of this product is that it appeals to virtually any demographic.  Who doesn’t love a trendy wristband?  And wait, it’s a sweatband too?  Sign me the fuck up.

Consider, for a moment, the versatility of this product; from your average workout enthusiast, to your more dedicated 80s clothing aficionados. Or whether that annoying group at the other end of the bar thinks they’re in an episode of Glee, or spent more on their vintage outfits than you did on rent, you can bet that the one thing they don’t have, and the one thing they truly need, is a wicked Order-advertising/Buffalo-promoting/perspiration-crushing wristband.

But this isn’t just for fashion, and this isn’t just to look awesome.  The Order is, above all, intended to support the city and its residents; to stand up when others stand by, and to lend a hand in even the most simple of ways.

So, gentlemen, I ask you—I implore you—to consider this seemingly basic article of clothing, and I do so not for myself, but for the hipsters of Buffalo.

The hipster has been a misunderstood race since its discovery, often persecuted for their perceived bastardization of style and culture, as well as a lack of basic hygiene practices.  But the hipster’s enviable flagrant anti-theMan mentality and their regurgitation of multiple rejected and often archaic fashion styles, have often been misconstrued as hostile to mainstream culture.   This is not the case however; as it is the hipster, more than any other attention-seeking fashion clique that seeks acceptance.

As a growing movement intended to benefit the city in which we live, supported by several members educated under the Jesuit principle of “men for others,” I ask you not to forsake our hipster brethren.

To turn our backs on this subculture, to deny them a small fashion accessory indicative of a much craved solidarity not only with our burgeoning grassroots movement, but with the city itself, could have disastrous effects on their individual and collective wellbeing.

It is well documented that hipsters with an inadequate number of mismatched fashion accessories will soon turn on each other.  Known informally as “hipster-cannibalism,” packs of hipsters will soon devour one another’s inconceivably chosen wardrobe to complete their own.

Should they avoid this particularly disturbing outcome, many hipsters become disoriented; their speech is slurred and conversation with one is almost entirely nonsensical.  This state is often confused by squares as the effect of excessive alcohol consumption or illegal drug use, but extensive research has shown this to be erroneous as the hipster is a clean living creature, shunning mind or body altering substances of any kind.

To turn our backs on this proud people—nay! to turn our backs on the very founding principles of the Order to which we have claimed allegiance is to risk a future of lost and aimless hipsters, reduced to huddling in doorways and begging on the streets for indie music mixtapes and organic foodstuffs.

And so I propose the creation of Order of Buffalo sweat wristbands for the sake of hipsters, not only in Buffalo, but worldwide in a selfless effort to complete their wardrobes.  Except for this guy–he’s good. 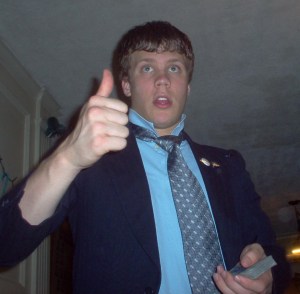 So in closing, I’d like to quote a great man in saying “that the point is, gentlemen, that sweat wristbands, for lack of a better word, are good.  Wristbands are right, wristbands work.  Wristbands clarify, cut through and capture the essence of the evolutionary spirit.  Wristbands, in all its forms; wristbands for life, for money, for love, for knowledge have marked the upward surge of mankind.  And wristbands, you mark my words, will not only save hipsters, but that other malfunctioning culture called the Buffalonian spirit.  Thank you very much.”

Posted on February 1, 2011, in Rant, the Order and tagged Buffalo Soapbox, Fraternal Order of Buffalo, hipsters, wristbands. Bookmark the permalink. Leave a comment.

← Unputdownable | the Dangerous Newspeak of Bookselling
I Love a Good Burger →