Do Your Part to Stop the Apocalypse

Death.  Its been on my mind.  Most days I drive home from work past a cemetery, a beautiful, sprawling park-like place enclosed with a lovely stone wall and complete with a little pond somewhere in there.  It’s nice as cemeteries go but it’s in driving past and noticing the sheer number of tombstones and mausoleums and memorial obelisks that I can’t help but think what a waste of fucking space that is.

and the music sucks…

Cremation is really the way to go and not just as a great space saver, but let’s face it: land, they’re not making any more of it and it’s getting harder to steal from the Injuns.

Ask anyone, the business of forced relocation just isn’t what it used to be—purely from a financial standpoint.  Plus, unless you want a few dozen acres of rotted out double wides, some twenty year old cars with no engines propped up on cinder blocks and a few piles of burning tires, that land isn’t worth much anyway.

Funerals are expensive, as anyone who watches a lot of daytime television can tell you—or probably anyone who’s ever had to pay for one.  They might know, too.  But according to my five entire minutes of research on eHow.com, the average cost has apparently risen since the last AARP supplemental insurance commercial I saw; up about a grand or two in the last couple years.

Let’s break down the typical costs involved in a funeral:

Then you have your cemetery costs

Opening and closing the grave $500

(because what good is a grave if you can’t get into it?)

(unless you opt for a solar-powered video tombstone to play a little movie, those are as much as $6000,  but totally worth it when instead of that beautiful farewell you filmed, your family accidentally uploads the video of the Fourth of July party when you taught your nephew how to shotgun Red Dog tall boys and then fell into the fire pit)

Ten thousand dollars to take up space on a plot of land that would be a great shopping plaza.  There isn’t a Subway or Coldstone within at least half a mile of that cemetery, so that’d be a great location for both if not for all those pesky dead people.  Just laying about too, the lazy bastards.  In hermetically sealed bronze double-lined caskets no less, that cost more then my car.  Not even fertilizing the ground around them.  That’s just plain selfish.

So yeah, they’re just laying around and not even being visited by anyone.  Well that’s why everyone is hanging onto this idea of cemeteries and burial plots and memorials, isn’t it?  So the living can go visit them, find some closure in their loss by talking to a slab of rock and pretending that person is still there, hanging around just in case you had a bad day.  I’m not saying it isn’t therapeutic.  I’m not saying it doesn’t help, that leaving flowers for their birthday or planting a little flag on Memorial Day doesn’t maintain one’s relationship with the dead.  But when was the last time you did it?

That’s a lot of Twinkies, that’s all I’m saying.

And what’s the average cost of cremation, your basic bare bones cremation?  $1000.

Now that can change; it can be more depending on the services you want, casket rental for the viewing, that kind of thing, but that’s still a big chunk you don’t have to worry about.  When really all you need to do is throw them in the oven and invite everyone out to a decent place and spend a few hundred on the open bar, maybe some food, and get just as much accomplished as a wake and a funeral and a ceremony at the funeral home before the funeral and standing around a grave  after the funeral and what to do with the flowers and where should the breakfast be—

Saving space and saving money, those are two solid reasons to opt for cremation over burial.  But here’s the most important reason, the one that beats out the other two hands down: fucking Zombies. 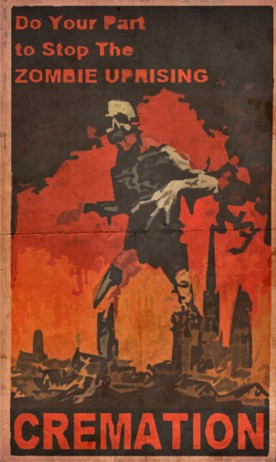 How do you win a war?  Limit your enemy’s ability to reinforce itself.  Yeah, modern warfare is less about throwing people at each other and more about bombs, but someone has to build them, someone  has to design them, design and build the systems that launch them, so it still comes down to people, to manpower.

The most important thing to do after a war is what?  Yeah, it’s to fuck.  You need to repopulate.  You have to because you can bet the country you just trounced is doing it too.  Wars don’t end, they just take time off.  If you don’t rebuild and repopulate between rounds, you lose.

So, zombies.  The living dead, the dead rising from graves and bursting from morgues and climbing from the rubble of forgotten war zones, and they come to consume the world.

Death and taxes, those are the only two things you can count in life, right?  So whether you like it or not, we’re reinforcing our enemy.  We’re going to die.  And when we do we’re going to rise.  And eat the living.  It’s the circle of life.

Cremation is the only option.

I’m not saying we should start digging up cemeteries and burning the rotting remains therein, but that’d be something to see wouldn’t it?

Driving past a cemetery and seeing a thousand open graves with flames raging from them?  Probably piss someone off though.  Desecrating graves, molesting bodies—and molesting is the right term, look it up, I’m not being perverted—tends to rub people the wrong way, even if it is for the greater good.

And it probably would be in our best interest to destroy the bodies that are already in the ground.  It’d be a good job for hobos, like the work programs during the New Deal, but instead of building dams and interstates they’d be digging up graves.  But either we destroy them before they rise or after, deciding when it happens is only a question of how many lives you’d like to save.

Zombies are coming, it’s only a matter of time and it’s unavoidable.  But we don’t have to strengthen the enemy’s numbers.  If everyone starts cremating now at least we can limit their numbers and have a fighting chance.

Besides, that cemetery I pass on my way home would be a great location for a new Wal-Mart.

Posted in Rant, What Was I Thinking?

Mr. Brady Says… Something He Saw On A Urinal Cake

You hold the power to prevent rape in your hands…

“I’m not the hero,” he said aloud at rewinding through the condensed movie that was the past two years of his life.

Was it humbling or humiliating that in one’s own life you are not the hero, but instead, nothing more than the one dimensional comic relief, the easily forgotten or mostly ignored piece of living scenery good for only the same handful of tired jokes no one heard; the court jester when one should be king but for a lack of gumption.