← The Insanity Wrought by In-Store Plays, or, Hey I Saw These Guys on YouTube a Few Months Back
Never Have I Ever Gotten to Fight Evil Toxic Waste Monsters From Outer Space / part 2 → 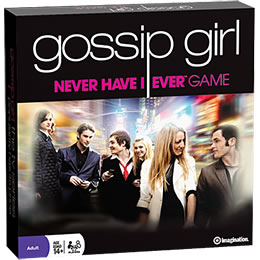 So the author of Pretty Little Liars has a new book coming out, Never Have I Ever.  Its part of her second book series, this one called “The Lying Game”, the titles of which, along with “Pretty Little Liars” make me wonder if she has some serious trust issues.

..ok, there’s the right one

Or perhaps some juicy skeletons in her closet given everything she puts her name to involve teens doing truly dastardly things.

Wait, do people still use chatrooms?  Where do you even find a chatroom these days? I mean real people, not pedophiles or people trying to catch pedophiles.

I’m pretty sure those are the only two types of people regularly using them, if they still exist at all.

Dastardly though, that’s where I was going with this.  What teen doesn’t have to deal with these everyday trials of growing up and finding one’s way in the world you find in a typical teen series like Pretty Little Liars or Gossip Girl, or that Nine Lives of Chloe Whoever, what is that an adaptation of the Cat Star Chronicles?   I don’t know, they both have people who are.. I guess cats as well—part cat?

Who among us doesn’t have trust issues, a laundry list of sexual mistakes, a friend that disappeared and turned up dead years later, a mysterious stalker who knows all your evil little tween secrets, or a twin separated at birth who’s identity you steal after they’re killed?

You know, those things.

This new book series, of course, shall also be an epic television show on the teen programming juggernaut that is ABC Family since every teen book is now a TV show or movie.  Given the crap they run, it seems obvious ABC Family really just needs anything to fill the time slots between Harry Potter weekends.

Although I suppose I should point out that Pretty Little Liars was pitched by a book company as a TV show, and Shepherd was hired to write the whole freaking thing.  Which is kind of awesome.  It makes me hate it even more while actually respecting it just a bit.

But the designation ‘teen’ for a book, that’s where I was going with all this, it doesn’t mean what it used to.  Teen books aren’t meant just for teens.

Calling it a teen book is like calling something a man’s shirt.  Chicks are still going to wear it—and look hot doing so.  Likewise, anyone is going to read a teen book, and they’re going to enjoy doing so.

In much the same way that Harry Potter, while categorized as Juvenile Fiction, is certainly not limited to readers between the ages of seven and twelve, teen books aren’t geared anymore towards just high schoolers.  As shocking as this may be, I’ve never read all the Potters.  I count myself among the recently born and perhaps a few feral tribes in Africa who haven’t read them all at least once, but alas, it is true.

So its said that the final three books are not children’s books, not in the manner the beginning books of the series are.  That makes sense though in that as the characters grow, so do the readers.

But kids’ books, teens books, they aren’t limited simply to those age ranges.  Grown women, young children in tow have asked for the Twilight books and touted them as the greatest works of literature ever spewed forth.  This whole Twilight thing is out of control, but it’s the most accessible example of how the boundaries of literary demographics have blurred increasingly.

Is this a compliment to the plots and writing abilities of these juvenile and teen authors?  Or a critique of the grown men and women who devour high school dramas and paranormal romances about incestuous angel-blooded teenagers?

I’m not sure I should be surprised that teen books appeal to adults, since TV shows geared toward teenagers are beyond fucking obnoxiously preposterous.  They apparently have the power to retard its viewers as well since even into adulthood these viewers’ reading abilities or tastes have never progressed beyond the level of these teen novels.

What I’m saying about the TV shows of today being epically pointless can be said of the ones I watched growing up.   Television shows have always been stupid.  Its practically a rule that not only must they as far fetched as possible, but they must also contradict themselves at every opportunity. And by at every opportunity I mean they must contradict themselves within their very premise.

Go watch the opening credits of James Bond Jr.  He learned the game from his uncle James?  Now he’s heir to the name?  Then how the fuck is he a Jr?

And why do I remember the theme song lyrics when I haven’t watched the show in twenty years.  Oh god, I just threw up in my mouth.  Twenty years.

do they go to an exclusive prep school for transgender dominatrixces?

And how could we forget about Tattooed Teenage Alien Fighters from Beverly Hills?  I don’t even know what the hell that is.  Apparently it was some kind of low budget attempt to cash in on the success of the Mighty Morphin Power Rangers, but it lasted forty fucking episodes.  Yeah, the premise here was that four teenagers were selected by this blob-like alien brain named Nimbar to fight monsters sent by Emperor Gorganus, monsters like Slaygar the Toxic Waste Monster.

This sounds like I just pounded a bottle of Southern Comfort and found one of those magnetic poetry sets.

Firefly only made 14, Freak and Geeks lasted eighteen episodes, not that all the episodes of either show were even aired, and now everyone involved in those shows take shits with bigger bank accounts then me.

Pretty Little Liars is actually starting to sound kind of good after reading up on the Tattooed Teenage blahblah blah blahs.  I think I’d rather watch a Vampire Diaries marathon then the Alien Fighters get their asses kicked by Slaygar or Neuragula, a giant brain that looks like a hideously deformed STD wracked vagina that tried to swallow an octopus.  And who can shoot laser beams.

I forgot what I was talking about…

← The Insanity Wrought by In-Store Plays, or, Hey I Saw These Guys on YouTube a Few Months Back
Never Have I Ever Gotten to Fight Evil Toxic Waste Monsters From Outer Space / part 2 →