Like I said, the construction was just the start of it.

If it weren’t for the construction this gelato incident may not have been as entertaining as it turned out to be.  So now you know the story as told to Natasha, which sadly hasn’t gotten passed around the store like I expected it.

But here’s what really happened. 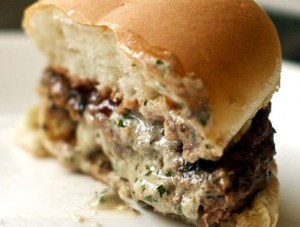 The real start of it was me being very, very hungry two days before.

This was the kind of hunger where you start kind of craving things you don’t normally want, or hadn’t had in a while.  Your stomach is growling and suddenly you can taste pickles or a stuffed bleu cheese burger, and now that’s the only thing you can think of.  Your mouth is watering, all you can think about is taking a bite of that burger; the way the bun feels like a sponge for a second before yielding and that instant your teeth hit burger.  You hear the crunch of the lettuce and can feel it all pack down and break away before tasting the bleu cheese that’s all melty and stuffed inside.

Once you get an idea like a bleu cheese burger in your head that’s it.  That’s all you can think about, all you can taste.

It wasn’t a burger I was craving though.  Well maybe—usually I am, so I could have been.  OK, I probably was.  But I also needed some chocolate.  Which is weird.

I’m not a big chocolate eater.  Every once in a while it happens though.  These things happen.

So I bought this candy bar from the café.

I only ate half of it.  It sucked.  The other half I threw in the freezer in the breakroom and forgot about it until I was leaving work the next night.  I grabbed it, thought it might be better frozen—you know, give it a second chance.  All chocolate is better frozen.  Experiment with a Reese’s Cup if you doubt this.

And then I left it on the passenger seat of my car.

Had I had to work the next morning this tale may have gone unhad, and had the temperature that Saturday afternoon not cooked the inside of my car up to eighty, I may have found out if that gelato candy bar was any good the second time around.

But alas… this was not to be.

Instead it sat and melted on my passenger seat.  I noticed it only after I’d thrown my messenger bag on the seat and climbed in.  It didn’t look that bad though, I didn’t think it was anything to worry about. 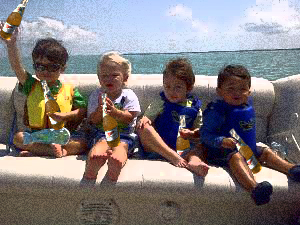 Tonawanda Constuction Team 6 kicking back after a job well---OK, not done, but started... sort of

I saw the traffic backed up on the Youngmann so went around, hoping the sidestreets wouldn’t screw me over so much.  I’d forgotten about the Maze of Forgotten Construction Projects.

Despite the Youngmann getting two lanes amputated no actual construction ever gets done on Saturdays, which meant whatever lame attempts were normally considered on those blocked off streets during the week weren’t even an afterthought now for those guys on the construction crews day-drinking on their boats.

After a several block detour I made it to work.  Parking I grabbed my bag and upon lifting it realized the extent of the Godiva melting.  That chocolate really can’t handle the heat.  It oozed even more out of the wrapper but at least, since I rarely clean my car out, there was an empty plastic bag I could throw it in.  I picked up my bag and checked it over pretty well, I thought.

Out of the car.  Bag on the shoulder.  Car keys in my pocket.  Store keys in their little pouch on the bag.  Pat down to make sure I had my wallet and cell phone.  Yeah.  Everything seemed to be in place.

And then I got into the office and set my bag down.

Apparently, when I searched my bag so thoroughly to ensure no melted Godiva Hazelnut Fucking Gelato had gotten on it, I failed to check the shoulder strap.

Because really—who checks the shoulder strap?  Why would I?  Who would think to?  The rest of the bag was clean damnit!  It was clean! 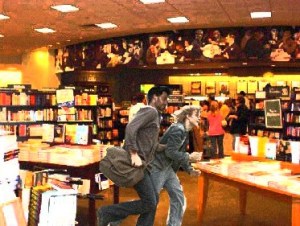 So now I have this explosion of chocolate on the front of my shirt, up near the shoulder.

It was nice a dug in too since I like to hang on to the strap while I walk around all,

“Look I have a messenger bag—I have so many papers I need to carry them in something—I can’t possibly carry all my important papers without a cool messenger bag.  Oh god, I’m so much better then you.  See, I have papers.  In a bag.”

That pretty much is what goes through my head, except I hate this particular bag.  There’s a padded slot for a laptop but mine doesn’t fit.  And it had these annoying buckles.  They clink.  The straps on them won’t stay tight so it’s just clink clink clink while I walk around.

I’m like a cat with a bell around its neck—but that’s not important right now.

I guess that’s actually it, that’s the real story.  Fucking candy bar melted on the seat of my car, got on the strap, ground into my shirt, and I started off my day frantically scrubbing my shirt clean in the breakroom.  The rest of what I said before was pretty much how it happened; warm water, paper towels, insistent dabbing, wet shirt, brown stain.  For a guy, and for this guy in particular, I think I did a pretty good job cleaning it up.  It could have been a lot worse.  Well it was a lot worse, it could have stay a lot worse is what I mean.

You could still see something, but it was more a shadow of a melted Hazelnut Fucking Gelato candy bar then the aftermath of Tommy Lister’s patented Hostess Cupcake Sledgehammer Punch that it looked like initially.

That customer really did screw face me and take a step back though, you know, to get the big picture of the disaster apparently.  So I screw faced him back and then found the book with the blue cover he saw on a table three months ago that he thought maybe had something to do with the ocean.

Posted on August 31, 2011, in Personal, Things I Come Up With While I'm At Work and tagged construction, Godiva, Hazelnut Gelato, Hostess Cupcake, messenger bag, Tommy Lister, Youngmann. Bookmark the permalink. Leave a comment.