← Muttonchops and Third Parties, Buffalo’s (Small) Part in Changing the World
The Death of William McKinley →

Recently, I had an idea for an app so I tossed it out my friend who runs BuffaloSoapBox.com and has had some experience with app development.  Although the subject material of this app is a mutual interest of ours, his response was more or less, “Meh.” 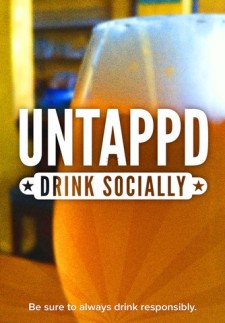 Nevertheless, I started trolling Google Play to see if something like what I had in mind existed already.  Through this halfhearted drunk Google Play stumbling I came across a choice little piece called Untappd.  For those unfamiliar, this is basically Foursquare for beer.

You ‘check in’ to whatever beer you’re drinking, add a photo, add your location, maybe a snobby comment, rate the brew and bam, your beer before work or the handful you have after when you go barhopping while your girlfriend thinks you’re still at work, are broadcast to all your friends and recorded to be used against you in court later.  Like every app out there you can connect it to Facebook and Twitter so it instantly shots your check ins to those sites, and your location is tied in through Foursquare.

There’s a few cool things about checking in to a particular beer—first of all, you can follow the brewery.  I can’t seem to figure out where to do this on the app, but if you’re on the website, the breweries you’re following are listed and you can click through them to see who else is drinking their brews and even which styles by them are trending.

You’re not just seeing random people across the country check in to beers.  Like Foursquare—and the interface is basically identical—you can friend people and see what and where they’re drinking.  This is a social app after all, so it isn’t just about what people are drinking, it’s where they’re drinking it.  Going back to the brewery pages, you can also see the bars where those beers are most popular.

The friend thing is cool because there are so many micros out there—I only have a handful of friends right now but they range from Pennsylvania to Oregon to West Virginia and California so I haven’t heard of any of the beers these people are drinking.

What if, for example, I had a buddy in Chicago, and he’s cracking open some microbrew he found at a dive bar on his way up to Kelly Lake, and this beer is brewed in Wisconsin and only sold within a three hundred mile radius of this bar.  Maybe it sounds pretty good.  Maybe it sounds so good you go visit him just to try some.  Or better yet, when he moves back to town, he brings a sixer with him.

Just saying…  Without Untappd you may never have heard of this beer.  This beer could change your life.

Most importantly though, Untappd puts things in perspective for you.  I don’t just mean that as you check into different beers you notice you’re maybe drinking too much.  That can happen, but this app isn’t for idiots playing beer pong who are marking down their cans of Natty Ice by sharpying hash marks on the wall.  You’re using this app to share good beer, not to let everyone know you think Genny Cream Ale is only a 2 out of 5 bottle caps.

The main thing I’ve learned from the brief time I’ve been using this app is that I drink shitty beer.  I want to believe it’s just the time of year, I’m a little broke after a couple vacations and you know how it goes.  My only major accomplishment with Untappd is that I’m friends with Wil Wheaton on it, it brought a tear to my eye when he accepted—but at the moment that only serves to twist of the knife that is my shitty beer drinking.

That buddy I mentioned in the example above is, in fact, moving back to Buffalo from Chicago, and he can be a little bit of a beer snob.  Maybe that can turn this around and help me save some beerface.

So check out the app and find me, shame me into drinking something that’ll make Wil Wheaton proud.

← Muttonchops and Third Parties, Buffalo’s (Small) Part in Changing the World
The Death of William McKinley →