“Maybe you can help me,” my co-worker said after she waved me over, “That customer over there is looking for ‘poetically written contemporary fiction.’ Everything I’ve suggested he’s pooh-poohed already.”

I made a face. I made a face like I… well, like I had to pooh-pooh a little. What does that even mean? Poetically written contemporary fiction?

First of all, the definition of contemporary depends on the person. You might think contemporary and modern are synonymous. Sounds like it. Maybe. Nope. I made that mistake when I took a class once called “Modern Philosophy.” That branch of philosophical namby-pambying starts in the 17th century. In a big picture kind of way sure, that’s modern times, but not for a 19 years old college kid. Contemporary philosophy, while closer to the mark, is still old. It picks up towards the end of the 19th century.

The periods in literature are more confusing and more poorly defined because writers are artists, which means we’re all babies and can’t make up our minds about anything. Periods overlap and lack any clear start or end. Contemporary literature, I guess, starts in the 1930s, because that’s what Wikipedia said. More or less.

But is that what this guy meant by contemporary? Your typical bookstore browser might say contemporary but mean current, present-day. Does he want new releases? How new? And what does he really mean by ‘poetically written’? I can jot down some sentence fragments full of adjectives and no clear point, if that’s what he wants. Better yet, I’ll write a full page and just delete every third word, let’s call that poetry. I think someone may have written a poem on the wall in the men’s room, how’s that for contemporary?

, but that’s more fantastical than poetic, even though I found the writing beautiful; a children’s book written for adults.  This reminded me I have yet to read Rushie’s sequel to Haroun, which aggravated me even more.  Giving up I said dismissively, “Just give him some Gabriel Garcia Marquez

. Every death article I’ve read talks about how poetic his writing is. Or maybe I’m confusing that with magical realism. I don’t know. You’re on your own.”

Before I could complete my dramatic exit however, I suddenly thought of a book I’d read a few years ago, one I came across by chance walking down an aisle in the Fiction section. It was depressing, full of imagry and difficult to follow; if that isn’t the purest definition of poetry then—well, actually I think I’ve made it clear I have no understanding of poetry.  After handing this book off to my coworker a couple others came to mind, and for no particular reason, I’m going to share them with you.  I’ll start with the one the guy purchased…

It was weird. It left me feeling as though I was looking up while being sucked down into a whirlpool. It’s been a couple years since I read it, so that could actually be something that happened in the book, I’m not sure. That’s the only way I can describe my memory of reading it. It centers on an man lying in a hospital bed in his dining room dying. In and out of consciousness, the world around him constantly breaks down as he moves through his memories and those of his father. What’s real, what is hallucination, what is the point of… all of it?

The cover of the paperback is absolutely appropriate: a snow-covered field, a solitary figure. Imagine being that—no, imagine being in that field and seeing that figure.  Walking across the field in the snow, the cold reaching through your coat and the fog of your breath pouring out of you, but never getting any closer to that figure, and that figure never turning around to see you. 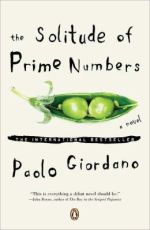 the Solitude of Prime Numbers

A few years ago, when this book first came into the store, a coworker and I instantly hated the author. Italian, good looking, twenty-seven and working on a doctorate in particle physics who, you know, in his spare time, wrote a novel. He’s probably one of those guys who makes riding a scooter look badass.  His author photo only rubs it in that I don’t have an awesome corduroy sport coat.  Yet.

The book makes you uncomfortable. There’s no point in trying to hide that from you. You care about the characters, you want things to happen, but you’re entirely sure if they deserve to be happy. You want them to be, you want things to work out. But you also give up and push them away. You’re rooting for and against them the entire time. It’s painful and beautiful in the same moment. Its infuriating. Paulo, you need to stop being awesome.

the End of the Alphabet

I saw this book on the shelf but forgot the title and the author. Three years later I finally tracked it down after countless internet searches with the incredibly limited information I had. This book is beautiful, inside and out; it is a tragedy of literature that it is out of print. OK, that might be a slight exaggeration, but the book broke my heart. Go find a used copy of it, buy it, it’s worth it. Be dramatic and read it on the porch during an afternoon rainstorm. Have either a glass of bourbon or a cup of tea within reach. It’s a short book. You can read it in one sitting, but it will be a book that on days when you are feeling alone or lost, when nothing can hold your attention, you will want to find it on your shelf and read again.

The main character, Ambrose Zephyr is going to die. He has one month, so he and his wife pack their bags to travel the world in alphabetical order. This is about loss, it’s about dreams, about love. It’s the shortest book ever written to cover everything that makes a life beautiful.

Posted on April 24, 2014, in Books, Culture, So You Want To Work In A Bookstore, Things I Come Up With While I'm At Work and tagged contemporary fiction, CS Richardson, Gabriel Garcia Marquez, Paolo Giordano, Paul Harding, poetry, Salman Rushdie, the End of the Alphabet, the Solitude of Prime Numbers, Tinkers. Bookmark the permalink. Leave a comment.