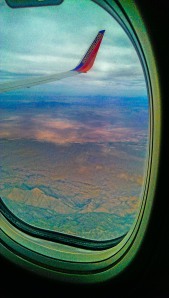 Well, after three days in San Francisco we failed to ride a streetcar, visit Alcatraz, engage in a high speed chase with Steve McQueen or eat any Rice-A-Roni whatsoever.  We did manage to visit the Full House house though, so props there, at least we did something right, and see an old man buck naked walking up Guerrero Street.

There’s no picture, I apologize, he was really trucking with his sweet, white wrinkly ass cheeks waving at us with each step and his old man manhood bouncing from thigh to thigh, and by the time the shock wore off and my camera was out, he’d turned to head uphill away from us.

Another thing we did right?  Eased into baseball trip.  This is the sixth official year we’ve taken a baseball road trip, a week-long marathon of touristy sightseeing, dangerous levels of alcohol consumption, even more dangerous levels of flatulence and even a few baseball games.  You know, when we’re bored.  This year we’re doing a West Coast North trip, hitting the Oakland As, San Francisco Giants and Seattle Mariners, which will put our ballpark total at 24 by the end of the trip.

What’s different about this trip is the start; not only did we not see a ballgame the very first day but we spent the first three days in one city.  While we still try to pack as much into our limited time in each city and along the drive to each stop, over the course of six years, we’ve learned to slow down a little.  We’ve learned some pacing, we’ve learned to slow it down where we can, we’ve learned to drink and enjoy our beer rather then inject the alcohol directly into our veins.  We’ve grown up a little.  Also, I think New Orleans may have broke us.  Twice.

Sorry, baseball trip joke.  Maybe I’ll share that story with you one day when you’re older.

See, there’s a a big difference when it comes to Baseball Trip Day One, between driving from Buffalo to Pittsburgh and catching a Pirates game at the comparatively small but immensely beautiful PNC Park, and flying from Buffalo to Kansas City for a Royals game.  PNC Park blew me away.  It’s on the water, it’s open, it’s a smaller place but not closed in at all.  Kansas City?  It was hot.  I remember that.  It was a nice enough park but I don’t remember much of the experience other then there were fountains (not as many as some Royals fans led us to believe, those packs of cheaters), there was enough swamp ass to go around, and at one point Tony announced to most of the outfield section that the fans there were a bunch of hicks.

Its important to ease into baseball trip, which is why this year, after flying from Buffalo to (Las Vegas and then) San Francisco, we settled into the house we rented at Page & Octavia and took our time getting our bearings and picking out someplace to go for dinner.  That’s right, not hotel, a house.  We rented a classic San Fran house for three days.  We fancy.  Well, we’re at least coming to terms with the fact that we’re adults.  Most of the time. 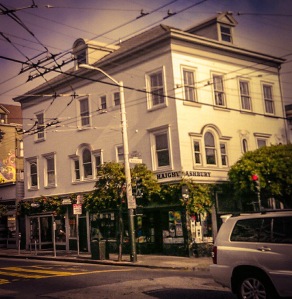 The house was in a great location for what we needed; near the highway to get us out to Oakland for the first game, walking distance to a ton of great shops and restaurants along Valencia and its myriad of cross-streets, not to mention Haight & Ashbury, 1709 Broderick Street for the Full House house, Ashbury Park with the hundreds of different things we never had a chance to do, and near enough to the subway to get us out to AT&T Park for the Giants game our last night in town.

We’re all from Buffalo, where you’re always twenty minutes from wherever you’re going and two blocks from the ghetto, that is a fact.  So we were in a great location in the city as it turned out we were always withing about a half hour walk from wherever we were going.

Haight & Ashbury was half an hour from the house, and the Full House house was half an hour from there.  The Full House house was supposed to be half an hour from home, but then we got cocky and tried to find the house from Mrs. Doubtfire.  It was a valiant but failed attempt, although we did get to ride the bus with a wonderful woman who told us the difference between Upper and Lower Haight, recommended a restaurant with “Porky the Piggy on sign” and said we should get out to Marin County if we could.  At least she thought it was Marin County. 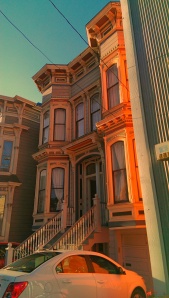 Then the bus dropped us off at our doorstep.  Literally.  There was a bus stop right outside our very tall front door that led into our crazy-high ceiling two story house in the classic San Fran style, with the super-hipster backyard in the heart of downtown San Francisco that cost us less then two hotel rooms for three days would have.

I told you it was a great location for us.  I think easing into this trip was the right choice.

Now bring on the Redwoods, Portlandia and those sparkly vampire bastards in Washington…