I really wanted “The Boatmaker” to be amazing.

The jacket description was so promising… and misleading.  “Reluctant hero” and “destructive love affair” are interesting descriptions for a man who would more accurately be referred to as an emotionally abusive (and at times physically violent) alcoholic who himself had been abused by his mother, who shacks up with a prostitute for as long as his money lasts.  He returns again once he’s sold off his only valuables to throw more money at the woman. Which happened to be about 70 pages that did nothing for the story or forward momentum of the plot other than making the boatmaker out to be an aggressive psychologically abusive drunk. 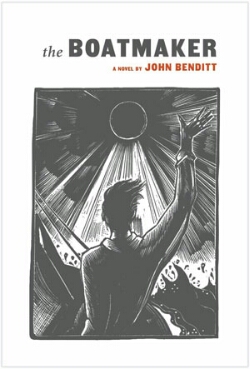 When the boatmaker reaches the Mainland the novel hits its main narrative stride, and this probably could have functioned on its own with only a chapter or two to introduce the boatmaker and the quest his fever dream has set him on, rather than the 130 pages of set up and unnecessary exposition that exists. The novel, as well as the boatmaker, spend this next arc redeeming themselves and creating a story that’s truly engaging. The boatmaker’s journey through the Mainland and his experiences there understanding money, religion, prejudice, and redemption was addicting.  It took me six months to get to that point, and a week to read the other three quarters of the novel.

The consistency of style is the most impressive thing about this book, and worth reading for such a technically well executed novel, despite the story itself, the meandering and elusive point of it all, lacking in satisfaction by its end.

Or maybe that was its intention…