How the search for the truth about one young girl who disappeared forty years ago can bring the greater tragedy of Canada’s Indigenous peoples to the forefront. 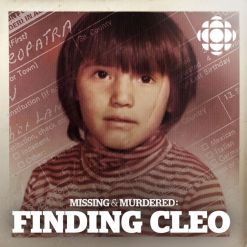 Its remarkable how one family’s story, the story of one young girl, can represent a larger tragedy. As I’ve listened to this story unfold, that thought has come back to me again and again. I recently listened to the first episode of the podcast “Finding Cleo” podcast through David Ridgen’s “Someone Knows Something”. I highly recommend all the seasons of that podcast as well, as David is so thoroughly Canadian and polite and wholesome as he investigated unsolved disappearances, you can’t help but be sucked in by it.

Before I’d even finished the first episode I was searching for more information and had started writing what would become an Instagram post and then this blog post.

The story of Cleo is a haunting and disturbing introduction to one woman’s search for the truth about her sister and the broader, dark chapter in Canadian/Indigenous history. This story does not just exist within Canadian history, however.  Examples of similar attempts at eradication can be found in the United States’ treatment of its own Native tribes or the treatment of those who were or considered inferior or intellectually disabled in the early twentieth century. While the abhorrent behavior of those in power toward those who had none is not new, this podcast  is able to narrow a broader tragic story down to focus on the dismantling of one family and the mysterious end of one little girl.

CBC News is launching Season 2 of the podcast “Missing and Murdered” with host Connie Walker about a family’s search for Cleo Semaganis Nicotine, who was adopted out of her Saskatchewan First Nations community and sent to live in the U.S. 44 years ago. During the first three episodes the mystery of just what happened to Cleo deepens as it’s revealed she may not have been adopted to Arkansas as originally believed.

The last time any of them saw her was in 1974 in rural Saskatchewan when Cleo was allowed to say goodbye to one of her brothers before she was taken to her new adoptive family. Her brother was himself adopted to the States, with government officials essentially bribing him in order to gain his complacency, before he sending him to a childhood of what amounted to slave labor in the United States.

Cleo was nine years old when she was stolen from her family, and she was one of thousands of Indigenous children caught up in what is now known as the Sixties Scoop.

Cleo was believed to have been sent to a foster family in Arkansas and killed while trying to hitchhike back to Little Pine First Nation in Canada, but no one had been able to say for sure how much of that was true.

Now Christine Cameron is joined in her search for the truth about her sister, and answers about the Canadian government’s attempted eradication and forced assimilation of First Nations people.

Listen to “Finding Cleo” on iTunes and visit CBC for photos and more.