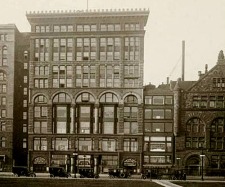 In October 1907, a new bookstore opened on the seventh floor of the Fine Arts Building in downtown Chicago designed entirely by Frank Lloyd Wright.

Designed when Wright was thirty-nine years old and little known outside the circles of Chicago’s elite, Browne’s Bookshop was as unique for it intent to feel very much like a home library or study as for its location on the seventh floor, and despite its short life was known as “the most beautiful bookshop in the world.”

Wright modeled the glass lamp shades from the windows he’d designed for his childrens’ rooms, and organized the store’s bookshelves around reading tables to create cozy alcoves in which to explore. 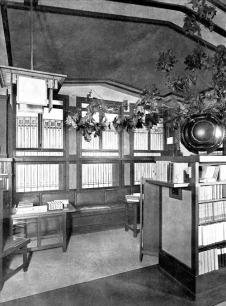 Francis Fisher Browne, the store’s owner and editor of the literary magazine The Dial, relocated the store to the building’s ground floor  in 1910 but closed it for good two years later.

While the Fine Arts Building still stands at 410 S. Michigan Avenue and some of the interiors look much the same as they did a century ago, no trace of Frank Lloyd Wright remains.

Check out the original article at the Paris Review for more information, including an interesting story about why the future editor of The Little Review, Margaret Anderson, abruptly quit her position as the bookshop’s manager.

More photos of the bookshop and the book covers Wright designed for the Caxton Club can also be found at this online catalog of Wright’s work, The Wright Library.