Phil is a terrifying creature.  He is bitter, vindictive, opportunistic, petty and his brain regularly falls out, which leads to some of his more outlandish moments and thankfully, his ultimate downfall.

And unfortunately, reading this novella within the context of the current presidential election, Phil is an all too recognizable figure.  You can hear a distinct voice as Phil begins to rant about border protection and keeping those lazy, puny Inner Hornerites out of the vast, good and generous Outer Horner.  Phil speaks in simple, passionate, fear-mongering language meant to evoke an immediate, emotional, knee-jerk patriotic response.

But Phil isn’t Donald Trump.  Except that he is.  And, according to the author, so am I.  And so are you. 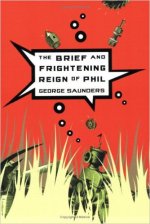 Originally published in 2005, “The Brief and Frightening Reign of Phil”

wasn’t meant to represent a specific person or dictator or ideology, and certainly not Donald Trump.  In fact, as George Saunders has said, Phil came to represent humanity itself in that he encapsulated us all and the terrible people we can become doing horrible things, whether out of fear or malice or self-preservation or whatever other justification we cling to.

“The story came to be about the human tendency to continuously divide the world into dualities,” Saunders wrote in his essay, ‘Why I Wrote Phil’, “and, soon after, cast one’s lot in with one side of the duality and begin energetically trying to eliminate the other.”

Taking more than five years to write, the ghost of an antagonist that haunted Saunders’ subconscious while he worked on ‘Phil’ changed forms constantly, from Hitler to Stalin, the atrocities in Rwanda, Bosnia, the Holocaust and, as time progressed, “Islamic fundamentalism, the war on terror, the invasion of Iraq, red states vs. blue states, Abu Ghraib, Shia vi. Sunni, as well as smaller, more localized examples of Us vs. Them.”

Some characters try to fight back against Phil, and some recognize that what he is doing is wrong but are afraid to act.  Others follow along, kissing up and betting on what looks to them like the winning horse.  After all, Phil has the loudest voice.  He’s speaking his mind and the people really like that.  He knows how to manipulate those around him, including the media.

Not all are fearful or cowardly and the world at large begins to fight back, but it’s ultimately Phil’s own ego that brings him down (with a little divine intervention) and saves the world of Inner and Outer Horner.  Even then, that tendency to see “us” and “them” comes through, and you understand that this was probably not the first and would not be the last time a scenario like this would play out.

Check out Saunders’ own essay that gives a little more background into how the novella came to be, even though I’ve quoted a good amount of it for you already.  If you have read the book already and enjoyed it, or if you’re interested in the craft of writing and how one gets from Point A to Phil, you should read it.

(And if it’s the latter reason, go and watch his video from the Atlantic)

Saunders has mentioned how at one point the book was over 300 pages.  Eventually, he found it necessary to cut it down for reasons of pacing and tone, but sometimes an author just can’t let go.  On ReignofPhil.com you can read what hit the cutting room floor in the outtakes section, with a little background on the scenes and why they didn’t make it.  It’s a great behind the scenes look you don’t always get with books, and it’s a pretty cool website, so take a look.