“On a scale of one to ten,” Alan asked, “what do you think this place is gonna like?”

After leaving San Francisco and checking out some bitchin’ redwoods, we were on our way to the California/Oregon border, the halfway point on our drive up to Portlandia.  What?  It’s just Portland?  It doesn’t have—you know, nevermind.  Tomato tomahto, let’s move on…

So we’re heading to the border where we had booked a beach house at this insanely low price.  The drive out there was starting to remain me of the drive through Canada to the Long Beach/Dunnville area, and maybe this is pretty standard for the beach front vacation property type areas: rural.  There are trailer parks, farmland boarded up motels and not much else.  And as we start wondering if this place is legit, and much like my first drive up to Long Beach a lifetime ago, this ominous fog starts rolling in.

OK, most of the drive was shrouded in fog, but this particular stretch of highway seemed to really want to stick it to us.  The fog is rolling in and we keep talking about how this reservation we have is really just an over-the-phone “handshake” deal.  “Bring a check or a credit card,” the guy told Tony, when he booked the single night for us, “I’ll be there to let you in.”

So Tony brought a check.  Not his checkbook, because who would do that?  A single blank check.  I know, because we almost left it in San Fran.  Because it was a single check.

But how legit can this place be, we wondered.  We’re all pretty into true crime shows and horror movies.  We know how this kind of thing starts.  We’re in the Pacific Northwest, the rural fog-covered northwest where none of us have had decent cell reception and no one has smiled at us.  Thirty years ago, this corner of the country was teeming with serial killers.  It was, just ask Ann Rule.  Her entire career blossomed due to the plethora of serial killers that operated throughout this region back in the day, and probably still do.

Not only can we not call for help, but no one knows where we are.  All anyone knows is that we’re renting a house in a part of the country with an astounding number of serial killers and pretty much still looks like the late eighties.

Bridgett always remarked that it was curious that there were a bunch of serial killers operating in the Pacific Northwest.  Driving through it, we know why that was.  There’s nothing there.  There are a lot of places to hide a body so no one will ever find it. Like everywhere. Again, very rural country, no one knows where we’re going, or when we should arrive.  No one’s going to miss us for a few days and by then some crazy backwoods guy posting ads for nonexistent beach houses will have us all chopped and scattered throughout the fog covered woods of the southern Oregon coast.

An honestly, the people out there aren’t that friendly.  Maybe we’re spoiled being from Buffalo, maybe we really our that friendly in Western New York that we’ve come to take it for granted that when we smile and say hi to a complete stranger on the street or the bus or in an elevator that they’ll smile and say hi back.  Or at least acknowledge us.   Or even move to the side and share the elevator with us, the sidewalk, their air.  We’re looking for any sign that we’re not dead already and on some kind of ghost road trip.  Is that why its so foggy?  Is this the netherworld?  Did the plane crash over Omaha and this has all been some kind of Purgatory?  Why won’t you people smile at us?

George is upfront navigating and is ticking off the miles and time to our destination:
“Six miles, should arrive in five minutes… five point two miles, five minutes… Four miles… Still five minutes….”

The fog is getting thicker.  The wipers are on.  We’re getting closer, the distance ticking down slowly, but each time he updates it we’re still five minutes away.

I take out my phone and scroll through the too many apps until I find the one with movie theme songs. I waiting for a quiet moment in the fog to play the open credits of the Exorcist, the only horror movie in that app. It gets a nervous laugh.

We pull into the driveway of a blue two-story house with an attached two car garage.  To the left is a freestanding three car garage with a door and window on the end that seems like an attached apartment, and for a moment I’m convinced we’re sleeping on cots in this guy’s garage before he pumps homemade chlorine gas through the vents and dismembers us naked in his homemade killing room while listening to the soundtrack to Beaches.

And there’s no one there.  We go to the front door, we look around back.  There’s a shadowy figure we can see through the side window who appears to be folding towels?

The guy finally comes out and doesn’t smile or seem to know he’s interacting with other human beings.  Shocking.  He shows us down to the “beach house”, which is actually just the finished basement of his house. 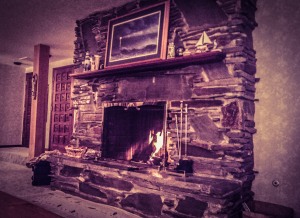 The fucking awesome finished basement!  This place was amazing!  There was a kitchen, two bedrooms, full bathroom, dining area, living room, friggin massive stone fireplace facing the living room (the back of which was the wall of the hallway leading to one of the bedrooms) and sliding glass doors off the kitchen, dining room and back bedroom.

There was a wall of DVDs amd VHS tapes (VHS!  He had a VCR down there!) that had every movie ever and included all three Librarian movies, the greatest movies ever. Those sliding doors led out into the yard with a covered patio and nice meandering path to the beach.

Oh, and there was a hot tub.

We ran down to stick our feet in the ocean just because we could, even though it was freezing and the fog blocked a decent view of the horizon.  Even grey and foggy the ocean was beautiful, and the waves crashing against the black rocky beach was enough to rock us to sleep right then and there.

Instead we crammed eight idiots in a hot tub and got drunk on West Coast craft beer while Katie and George built a roaring fire to warm us while we watched the Librarian.

As Tony put it, “Best baseball trip ever, turds!”

Well, at least until I woke up the next morning to this:

I have made this, and it is good.