Conflicting Tales of the Thayer Brothers

Riding the high of having made a research request from a university special collection like I’m Indiana Jones in the Biblioteca di San Barnaba, I decided that the only way to properly research another story I’m working on is with print outs as well. 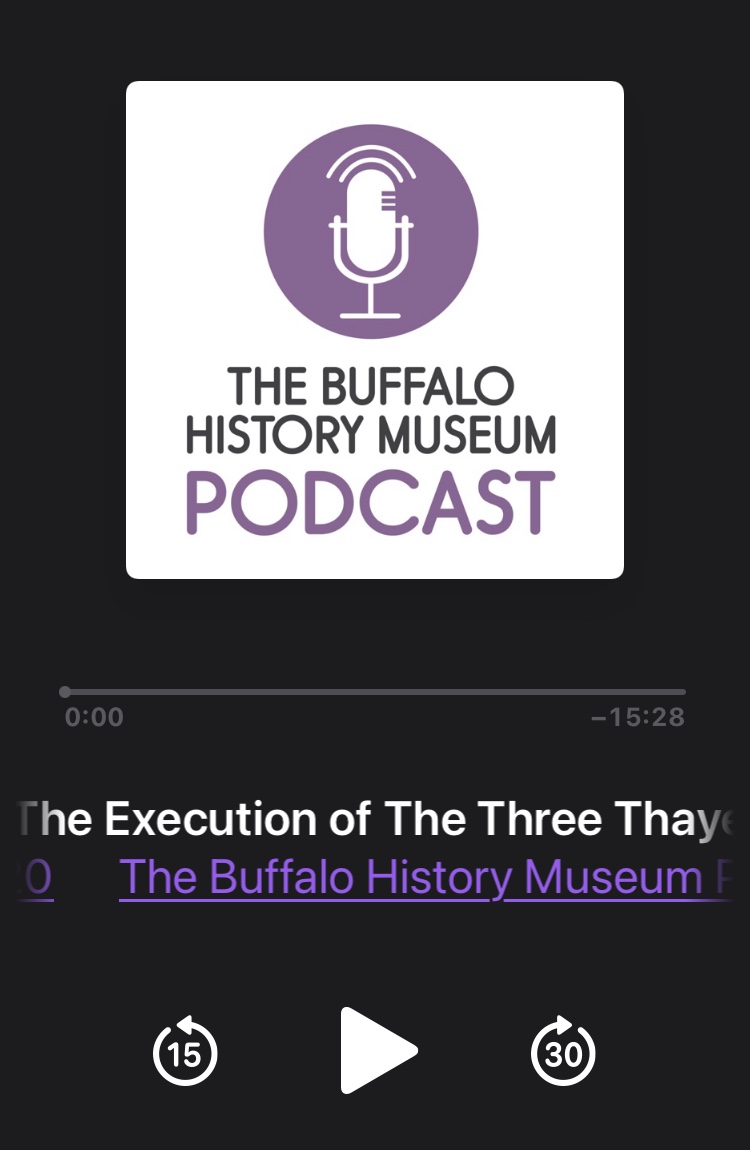 A few weeks ago I found the podcast produced by the Buffalo History Museum and this is going to come out wrong, but I was really surprised with how good it is. I should explain that I’d tried to listen to a Buffalo podcast several months ago that was at best a trainwreck. It was the living, unnecessarily profanity drenched embodiment of all the memes that say friends don’t let friends start a podcast during a pandemic. I tried three times to listen to the first episode and while I understand the choices they made for telling the story, all of those choices were wrong. That isn’t the case with the history museum’s podcast. It was excellent from the start. Well produced, well researched, and Anthony Greco, the museum’s head of the exhibits who narrates the podcast does a great job.

I started with the first of three episodes they’re doing on the Pan Am Expo and assassination of William McKinley, and then went back to see what other interesting stories they might cover. They’re pretty short episodes, which is nice. It seems like the trend over the last year is for a lot of podcasts to get longer and longer. What were once a solid forty five minutes episode are now getting close to two hours because the hosts have nothing else to do and think they’re funnier than they are.

Instead, the history museum tells a concise, intriguing story and, as in the case of the three Thayer brothers, might send some listeners looking for more information.

A week or so after I listened to the episode I was reminded of a monthly flash fiction contest from a great little horror publisher, Cemetery Gates. The theme for May is true crime and it took me about thirty seconds of brainstorming to connect it with the story I’d just heard about the first and only public execution in Buffalo.

Buffalo wasn’t even a city at the time of the crime. In December of1824 when the three brothers murdered a man of o whom they owed money the Erie Canal had yet to be opened and Buffalo was still a village of a few thousand. The site of the brothers’ execution in Niagara Square is actually where Buffalo’s City Hall would be built a hundred years later. 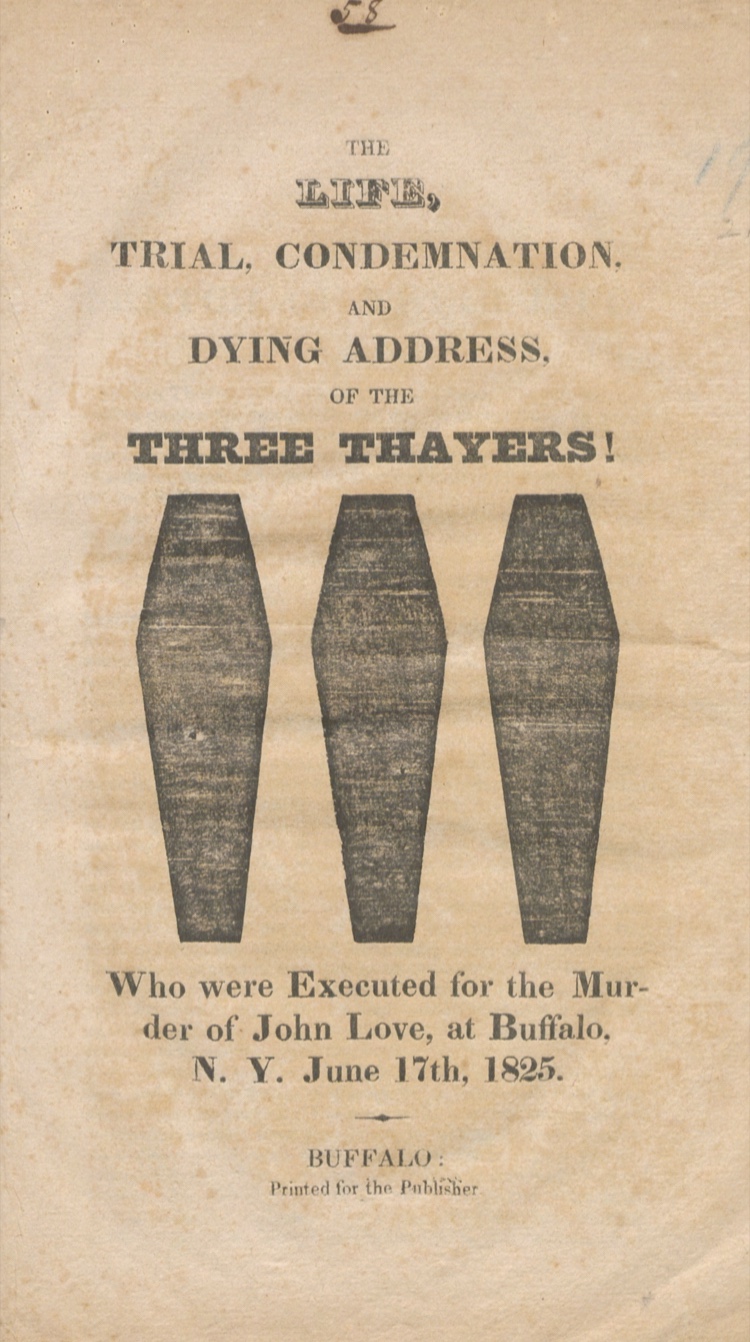 I was able to find a great copy of a pamphlet printed at the time of the Thayers’ executions that detailed their lives, trials and executions, along with one of two long poems written at the time about the crime. Apparently lyrical odes to vicious murders were a thing back in the day.

It’s great to have this contemporaneous account of the trial testimony too since it’s the fourth account I’ve read or listened to of the crime. All four have been slightly different and while I may lean towards the pamphlet as the definitive record I’m sure that one isn’t free of errors or embellishments.

The story I’m working on has to be under 1500 words, I’ve been doing pretty well staying on target there. I’m not entirely sold on my structure for it but maybe once I finish it and take a couple passes through it, reread the pamphlet for the sound I wanted, I’ll feel better about it.

Maybe it’s the multiple poems and conflicting accounts of the crime, but I’m reminded of John Horner Jacobs’ short novel “My Heart Struck Sorrow,” the second tale in his “A Lush and Seething Hell.” 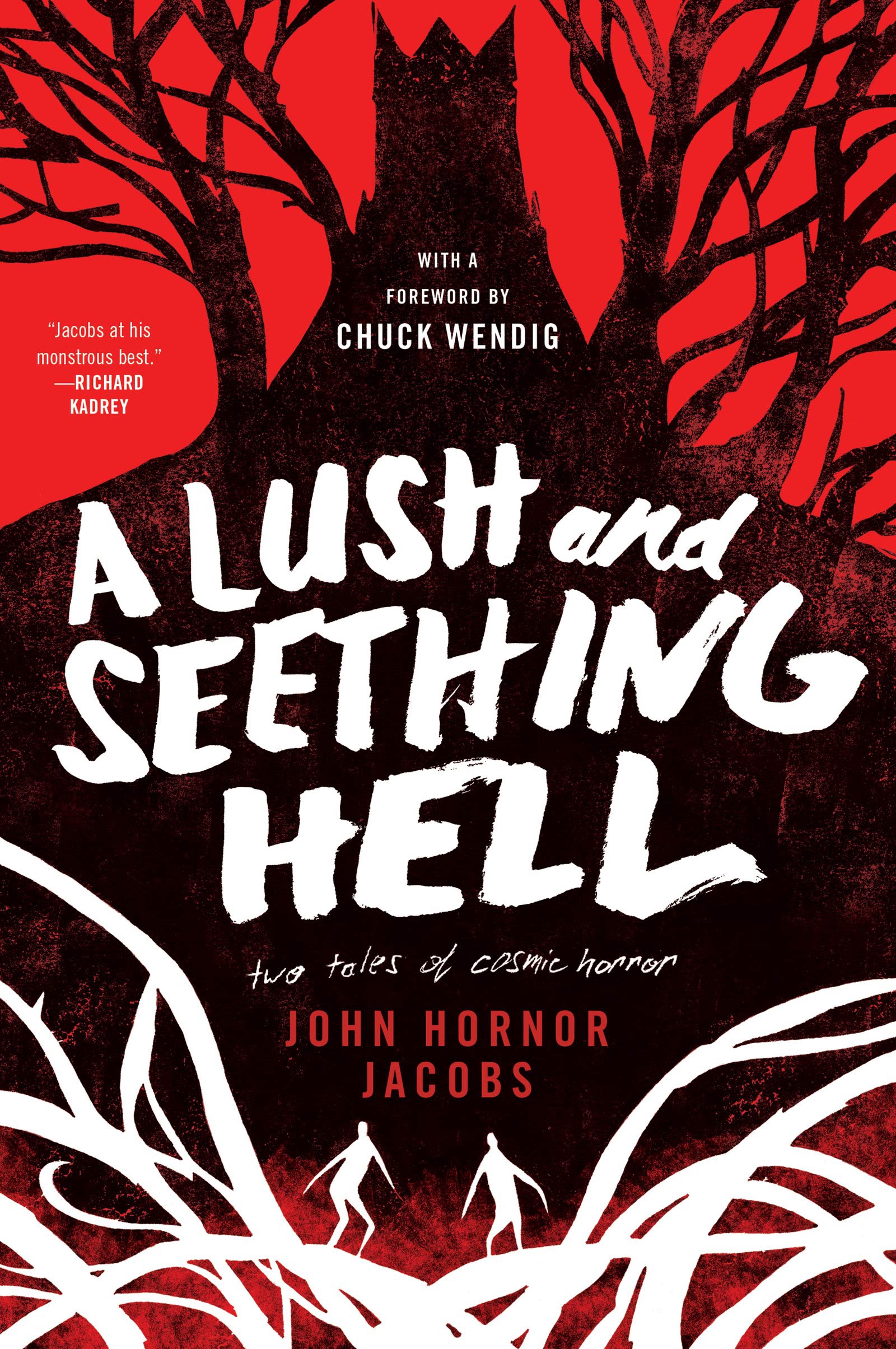 It’s an unfair oversimplification of the story to say it’s about the history of the song ‘Stagger Lee’ but I am going to leave it at that for now. The story is horrific in multiple ways and the history it plays with is fascinating. I didn’t live the first story in the collection, but ‘Sorrow’ has definitely stuck with me. My appreciation of Chris Whitley’s cover of Stagger Lee may have something to do with it as well, but Jacobs certainly crafted an engaging tale.

I don’t have the word count right now to attempt telling the Thayers’ story in the way Jacobs did for Stagger Lee, but you never know, maybe I’ll revisit it later.

After my last piece about William Hope Hodgson and Carnacki the Ghost Finder, I realized no one out there was going to write that Magnus Archives-esque narrative of Hodgson’s death in World War I, so I started writing it myself. 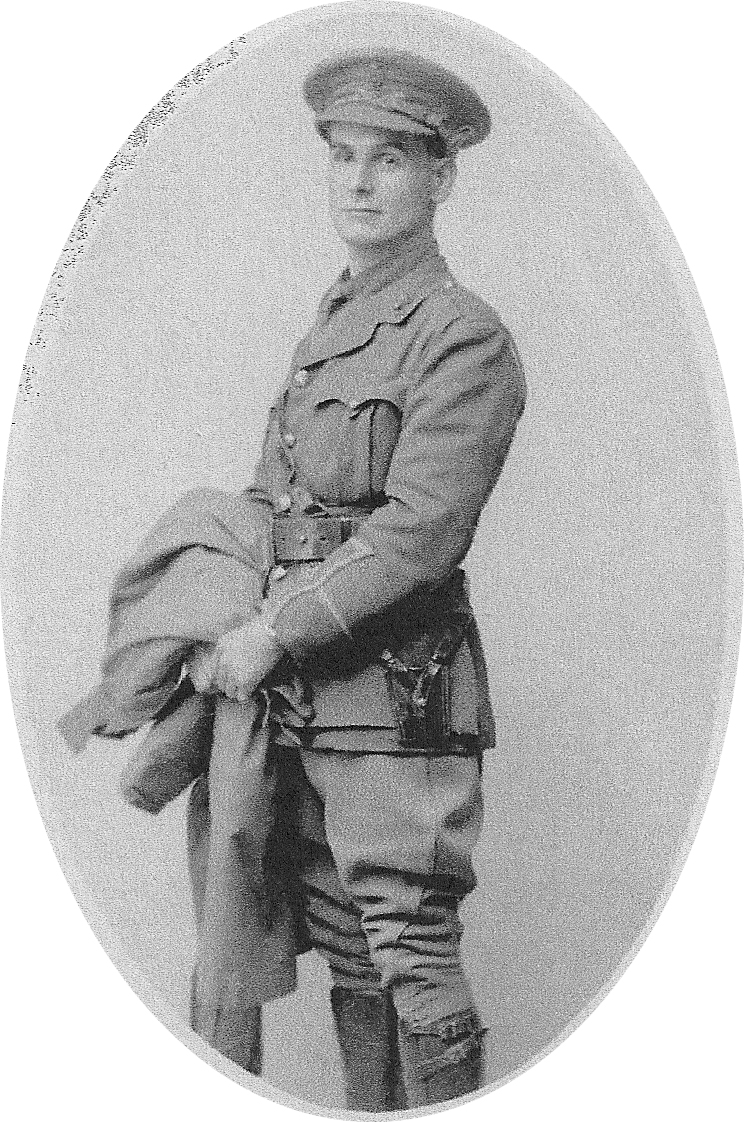 As I got started on the actual writing and making some notes, I thought it might be good to have some letters or journals of soldiers from the war. This site, referencing R. Alain Everts’ essay about the life of William Hope Hodgson, seems promising and mentions some sources that help understand what Hodgson would have experienced.

But as I thought about where I wanted to story go, centered around a specific incident I’d read about during Hodgson’s career as a sailor and how to twist it into something supernatural, I realized some of the author’s own journals might be helpful as well. Apparently he kept diaries throughout his life and I went looking for some published collections of them or even those print on demand collections of poor quality page scans.

What I found instead was a special collection at the University of California of short stories, legal papers, photographs, correspondence and an undated “diary and log of an expedition at sea.”

So now I get to feel like a real writer doing research that doesn’t involve a multitude of conflicting Wikipedia pages! I was able to request scanned copies of the diary, which hopefully will give me an idea of how Hodgson sounded. I realize this isn’t a big deal for most writers even those who applied themselves in undergrad. I did not. Trust me, I paid for it. Or rather, I defaulted and then paid for it. While a part of me wishes I had done the work at the time, I get to have some fun now discovering these collections and resources.

I’ve been reading “Carnacki, the Ghost-Finder” and there are a handful of phrases and words that Hodgson seems fond of using. But you don’t necessarily know if that a product entirely of the narrative voice or Hodgson’s own. Perhaps with his own diary, and later on, letters or correspondence from other parts of the collection, I’ll be more comfortable with how he might have told a friend a story of say, a malicious spirit that’s been hunting him for years, demanding payment for the soul Hodgson stole from it, and which may have finally caught up with him in the trenches of Belgium.

Or it could be forty pages of single sentence entries remarking on who of the crew had scurvy now. Still, it’ll be fun to find out.