A New Hope vs the Man of Steel

It’s time to geek out for a second, but to do so for a very good reason.

Typical geeking out generally involves debating the finer points of Star Trek or time travel at a bar somewhere in the neighborhood of 2AM when I’d been drinking since it was light out.  Depending on the season, ‘drinking since it was light out’ could mean five o’clock or this could mean eight, but it will generally always involve the Elmwood Lounge.

Back to the point: geeking out— 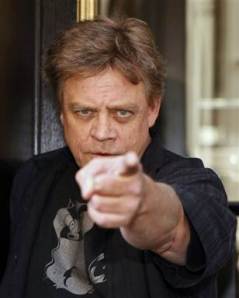 Who do you think would win in a fight, Luke Skywalker or Superman?

I ask this because today is their birthday—I’m talking about Mark Hamil and Christopher Reeve.

Is it fair to look at Hamil and Reeve and, rather than see the men and their accomplishments and body of work, wonder which one of them would win in a little Rocky V style streetfight?

And don’t start playing that game with me, you know damn well what happened in Rocky V—do not pretend that movie doesn’t exist.  I saw it, you saw it, and sticking your fingers in your ears yelling, “lalalalalalalala” isn’t going to change it.

It doesn’t go fromDrago to Rocky Balboa—you know it doesn’t.  I don’t like it anymore than you do, but burying your head in the sand isn’t going to make it go away.

This match up actually makes perfect sense and none at all.

I could argue that in the Star Wars universe within the plethora of alien races bouncing around Kryptonians aren’t that out of place.  Superman can—apparently—breathe in space, or not need to breathe at all, however you want to say it.  He’s gone to different worlds right, different galaxies?  He could totally make it to a galaxy far, far away.

Countering that is some fanboy who, after correcting my pronunciation of manga, will remind me that despite the spaceships and flying cars, the cloud cities and laser guns—in short, the highly sophisticated whats-its, gadgets, gizmos and whatchajigits—all that space opera nonsense took place a long time ago.

So while Kryptonians may theoretically cross paths with races from the Star Wars universe, Superman himself is unlikely to do so.

Unless he travels back in time.

OK, so let’s just forget about ‘long time ago’ nonsense.  I never cared for that.  Yeah, it sounds cool in that grand epic way, but it’s stupid.  It is.

Let’s go with the understanding of the Force that we all took away from the original trilogy: the Force is essentially magic.  Jedis are more or less super-hippies but their glow sticks can cut you in half. Being a Jedi is all about getting in touch with the energy that flows through all things, and through meditation and mental training and all that, controlling that power and using it only for good.

Somehow to believe in magic is preferable to the “explanation” from Phantom Menace.  Did we really need Qui Gon to finger prick the little kid from the Pretender flashbacks to know?  Can’t you just sense that… with the Force?

Whatever, so the Force is magic.  Superman doesn’t do well with magic.  Kryptonite and magic, those are his weaknesses.  And shellfish.

So if the Force is magic Luke should have a chance here.  He could use it to “see” Superman coming, even with superspeed, anticipate his attacks and react to some degree.  His mastery of the Force could give him a fighting chance, possibly a shot at grabbing or at least deflecting an attack from Superman.

Superman has his heat vision, but that should be deflected by Luke’s lightsaber as easily as a blaster.. blast.  Superbreath might be a little trickier since not only is it cold but if Superman took Lois out for a nice Italian dinner prior to the match, that could garlic laced superbreath.  Its well known that in addition to dirty thoughts and getting super angry, nothing weakens a Jedi like garlic breath.

OK, so lightsabers.  I’ve read a few things about maybe a lightsaber can mess up Superman, maybe it can’t.  Lightsabers are pretty badass, I’m not sure I should have to point that out, and they can cut through just about anything, so that might give Luke an advantage over the Man of Steel.  If he can get close enough to him to use it.  And score any hits what with Superman superspeed dodging him.

Now some thoughts are that a lightsaber, despite it awesomeness and incredible power, would be completely ineffective against Superman.  He’s resistant to… you know, everything; plasma, extremely high temperatures, nuclear explosions and, according to Wikipedia, “extreme force.”

So if none of those things can harm him—I did mention nuclear explosions—can a lightsaber even put a scratch on him?

It might, but only if the crystal used to harness said awesomeness and incredible power was kryptonite.  Whether that’s possible is also up for debate.  Maybe it isn’t, or maybe it just needs some Sith tweaking to make it so.

According to the Wookiepedia, Luke does briefly go the Dark Side.  It’s some nonsense about Palpatine coming back—he has clones or something.  I don’t know, but if that’s the case he should be all set.

So the Sith will tweak their lightsabers.  They don’t exactly play fair, in case you haven’t noticed, and if Darth Maul or Count Dooku are any indication, the Sith have skills when it comes to manipulating lightsabers.  If there’s any advantage to be had from this, Luke needs to exploit them.

Of course, going back to the Superman turning back time thing, all he really has to do—if you want to believe Luke makes it five minutes of jacked up Force fighting and kryptonite lightsabering—is fly in circles until he goes back far enough to find baby Luke and “pound him into goo.”

Might seem unfair, but Superman isn’t going to let some womp rat shooting cry baby take him out.  Superman is pretty much the supreme being on the planet, he’s held off Darkseid, he’s come back from the dead to kick Doomsday’s ass, he’s indestructible.  And he knows it.  The ego is a powerful thing, and like the vision and the breath, I’d imagine that’s a super- too.  So if things start going in Luke’s favor, I wouldn’t be surprised. 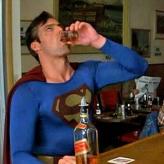 Doesn’t necessarily sound like the boyscout Superman has come to be depicted as does it?  No, but much like Luke, in order to make things interesting in this throwdown, we’re going to need some dark Superman—that’s right, I’m talking about Superman III!

We need junkyard Superman, with the  darker blue and the five o’clock shadow—the one that starts shattering liquor bottles by flicking peanuts at them after a solid round of day drinking.

Superman would have the upper-hand here without a doubt because he’d be drunk and therefore supercoordinated.  Plus, the only time I ever saw Luke in a bar, he almost got disemboweled.  Maybe he was underage, maybe he shouldn’t have been in the Cantina in the first place, maybe those were just a pair of interstellar truckers looking to explore his Death Star.  I don’t know.  I don’t want to know.

What I do know is that if it wasn’t for the geriatric Brawlin’ Ben Kenobi that kid would have been toast.  And he wouldn’t have shit right for a week.

But now you can argue that if we have a Dark Side Luke and a Junkyard Superman, it isn’t the true characters anymore so the the point is moot.  Maybe, but that’d be a hell of a fight.

Deep down, even though I’d love to see an epic battle here, I think a Superman/Skywalker throwdown would look a lot like that Lonestar/Dark Helmet fight from Space Balls.  Superman is just going to reach out and hold back Luke’s head while he goes on swinging and swinging and finally gets all tuckered out.

Then Superman throws him into the sun because that’s what Superman does with everything he doesn’t like.