Coaxing Salinger to Come Out and Play 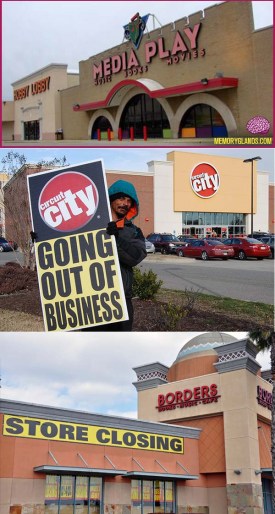 Things have gotten a little weird at the ol’ bookstore.  Now, I’ve joked with friends about the bookstore being the new bus station, but lately that really hasn’t been far off.

From the loungers, the loiterers, the grazers and the panhandlers, to those who come in simply to have someone to talk to; it seems every time another store closes that would service a particular variety of “shopper” we get a new influx of customer.

Media Play was the start of it in 2006 and then, to a certain extent, with movies and music when Circuit City bit the dust in 2009.  It wasn’t until Borders went under in 2011 that the true decline of—well, let’s borrow a phrase from Syms (which also closed in 2011) and refer to our client base as—the educated consumers became clear.

For a while the most puzzling thing was that once a week a customer would come into the store between open and let’s say eleven o’clock.  He would go into the men’s room and read a paper in the handicapped stall.  And eat half a banana.  I know this for a fact because there would be the remnants of not only a Buffalo News in the corner, but also half a banana.  Who does this?  Who decides that the best place to have their morning paper and half a banana (HALF!) is the handicapped stall at your local bookstore?

So that was thing that happened.  And for a few years I thought that was the worst of it.  Then the shit started.  It was on the walls, on the floor, on every surface of the toilet except within the toilet itself.  It was even on the carpet, leaving a trail across the entire store like a sick imitation of a Family Circus comic, before erupting within the bathroom on the aforementioned walls, stalls and floor.  It was even on the uppermost portion of the stall-wall.  That could only have gotten there by someone picking it up and smearing it.  I know that.  You know that.  Whatever excuses you may try to make for the previous poop-splosions throughout the store, feces on the stall wall was not accidental.

Sadly, now we have reached a new level.  Every once in a while there would be a nudie magazine in the men’s room.  This is pretty standard stuff, to be honest.  It is.  It is to the point that the people who run our magazine division recommended that for adult magazines that arrive in plastic wrap one copy be opened and left  on the shelf, as this was going to happen anyway.  More so, when we returned magazines to our distributor, back before magazines were simply recycled, we had a log to keep track of copies found in the men’s room.  So you see, there was a separate accounting of magazines we were no longer able to sell due to prior (and no doubt) vigorous “test drives.”

and really, this is what you’re jerking off to?

Apparently, not only was this book stuffed into the fold-up baby changing station in the men’s room, but along with it, as the cleaning woman described it was, “That dude’s excitement all over wall.  I saw that [book], and went ‘ew!’ and then saw his stuff on the wall, and was like, “EW! Oh no!  Oh! No!’

This woman has been working for us for a while now, so she’s seen some shit.  Literally and figuratively when it comes to clean up.  We’re not the only store she works for, but I’m going to say we’re one of the most traumatic janitorial experiences she’s had.  This was a little much for her.

When her pregnant daughter-in-law, who works for her from time to time, complained about having to pee before they started cleaning the bathrooms, she responded with, “Well, stop being pregnant then if you’re gonna complain so much.  It’s your own dang fault.”

She takes it all in stride, she tells it like it is, and somehow remains a pretty cheerful person.  That’s saying something considering how disgusting this store is able to become on a day by day basis.

What people do to those restrooms between the hours of 9AM and 11PM is unimaginable, and a lot of it falls on the staff to clean up; I’m talking minimum wage bookstore employees mopping shit off walls kind of clean up.  And she has to deal with worse than that.  She is no-nonsense and delightfully hilarious about it.

But finding a sex book in the baby changing station with some dude’s “excitement” sprayed all over the wall?  No, that takes it to a whole new level.

What kind of person are you that you’re doing that?  I can’t even take a shit in that bathroom without six people coming in and out, usually one of them is whistling, another is talking to himself, one’s on their phone, some little kid is talking to his dad about going oopsies-poopsies, and another really needs to get his prostate checked because he’s grunting and wheezing just to squeeze a few drops out.  That makes it difficult for me to take a shit.  It does.  I like my privacy.

But you?  Apparently you can rub one out even with all that going on.  And without any of those people parading in and out of the restroom being any the wiser.  You didn’t just argue with Henry Longfellow, no you blasted your manhood all over the wall.  Part of me is surprised you then just left it dripping there, but that was just my initial reaction as a human being with some level of self-respect.

Really, if you’re the kind of scumbag to cook up a big oily batch of Victory Gin in a bookstore bathroom then yeah, you’re going to leave it right there for everyone to see, aren’t you?

Posted in Rant, So You Want To Work In A Bookstore, Things I Come Up With While I'm At Work, What Was I Thinking?