Struggling to Read “Lawrence in Arabia”

War, Deceit, Imperial Folly, and the Unbelievably Boring Start to the Story of How American Business Destroyed the World

I’m currently listening to Scott Anderson’s “Lawrence in Arabia” through my Libby library audiobook app and it is remarkably unengaging.

I’m struggling. Would it be better to read rather than listen to it? I’m not sure if that would matter much—there is so much history and political maneuvering, so many individuals beyond the principle figures that are constantly being introduced and threaded into the convoluted history of European and American interference in the Middle East on the brink of war that I’m constantly listening to portions again but coming away not at all more sure of what is happening.

At a quarter of the way through it still feels like an introduction. Although, as I write this, Anderson is now touching on the beginnings of the Armenian Genocide, the German spy who’s brother and nephew would both go on to be the first and seventh presidents of Israel, and the scathingly passive aggressive letters Lawrence sent his incredibly abusive mother regarding the death of his youngest brother, who was her favorite child.

So, one hopes I spoke too soon and the threads of crumbling empires at war, religious communities searching for political identities and oil-hungry corporations manipulating them all begin to tighten together into a more engaging narrative.

Follow me on Goodreads to see what else I’ve been reading….

Attack of the Killer Ants, and Other Adventures in Paradise

(n) 1. a situation in which one species competes another into extinction.

2. the inevitable elimination from a habitat of one of two different species with identical needs for resources.

While I didn’t love the book itself, despite enjoying Chuck Wendig’s writing style and Xe Sands’ narration, there were certain elements of the story I found fascinating. One prominent idea in the novel was the concept of competitive exclusion, and regardless of what was happening in the book with genetically modified killer ants, it was a concept that grabbed my attention for its implications beyond the themes of futurism and doomsday/survivalist prepping. Eliminate the characters, the ants, the hi-tech monster story and the shell game of human monsters pulling strings throughout, and you still have this concept.

We live in a world of finite resources. But we have also been poisoned to believe that finite means limited, and that in order for you to have enough, I must not. We have been indoctrinated by survival of the fittest, despite us all having the potential to be fit enough to thrive.

Read the definition again. Rethink the concept. Competitive exclusion is not what our initial assumption assumes it to be. It is “a situation in which—”

It is a situation. It is a situation in which two organisms are made to compete against one another. And much like in Wendig’s novel, it is a situation created and constantly influenced by those in power, those with wrath, those with unlimited resources all at the expense of those with no knowledge, no shelter, no protection beyond what might be scraped together during the panicked stampede of an isolated island’s population.

So while we may not be trying to escape face-eating genetically modified ants, it might be useful to look around at rush for resources we see everyday in the ‘fight for $15’, in teachers union strikes across the country, in food deserts in every community in the wealthiest nation in the world, in lawmakers threatening to take away school lunch funding to schools that fail to hit standardized test standards, in billion dollar companies run by millionaires eliminating jobs and closing factories to maximize profits, and the elected officials that earned tens of thousands of dollars voting against needs of thousands for the benefit of a few. All of this is an engineered situation that depends on anhysterical and uninformed reaction by those with little power so that the few can hoard resources and stockpile assets beyond what could be conceivably utilized.

Now that I think about it, we might have a better shot against the ants. 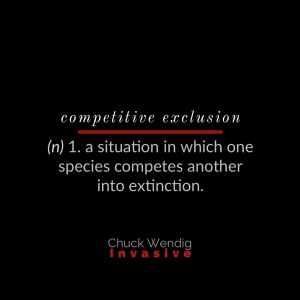