The Important Part is There Was a Cape

I’m pretty lame now, so I don’t dress up for Halloween anymore.  Usually I’ll think of a cool costume in June but by the time Halloween rolls around, I can’t remember what it was.

Besides, like grocery shopping and buying new socks, Halloween is a lot of pressure.  Do you want a scary costume, a funny one?  Are you going for clever because what if no one gets it and you spend all night explaining it again and again to rolled eyes and polite laughs?  And if you’re doing a couple’s costume?  That’s even scarier—now in addition to your own, you’re responsible for someone else’s.  If that costume idea goes bad, you’re in trouble.

I suppose there’s a lot of easy ways around all these things, like calming down and realizing its just Halloween.  But it’s not that easy, it never is.  After all, as Margaret White always says, “They’re all going to laugh at you.”

I had some weird costumes growing up and some simple ones.  Dracula, Wyatt Earp, box of lucky Charms, typical stuff.  This one year in particular I remember having a pretty awesome costume, way cooler than any of the store bought crap my classmates had.  It was an easy  one to make too, I think.  And that’s what every parent wants right, an easy costume?  So what was this awesome costume you ask?  I was SuperTed.  Yeah, that’s right. 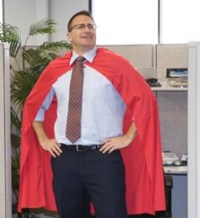 The costume was pretty simple too; a red sweatsuit, some felt my mother attached to the front for his emblem, a cape (goddamn right I had a cape) and the finishing touch: the head and hands of my previous year’s costume, and I was transformed into a beary awesome superhero.  Oh right, yeah, I was a Carebear the year before.  May or may not have been Sunshine Bear.  Moving on—I had a cape, have I mentioned the cape?

You have no idea who SuperTed is, do you?  Fine, whatever.  Here’s some backstory on him:  he was created in 1978  as a storybook character by a Welshman because his kid was afraid of the dark.  That led to a kid’s cartoon series like everything did in the late 70s/early 80s.   The original cartoon was the first British cartoon broadcast in the US when it aired on the Disney Channel.

Then, in 1989, Hanna-Barbera made a second series, The Further Adventures of SuperTed, which aired as part of the “Funtastic World of Hanna-Barbera.”  The other shows included in that ‘funtastic world’ you might remember a little better; Fantastic Max, Don Coyote, Bill & Ted’s Excellent Adventures, the Midnight Patrol, and even a little Pup Named Scooby Doo, but no one liked that show.

If you never watched these shows, you had a terrible childhood, and your Saturday mornings were clearly completely wasted on you.  I used to sit through infomercials on Saturday mornings because I was so psyched for cartoons; I’d wake up too early.  Nothing has really changed, apparently; I’ll still watch fucking anything on TV.  Really, I just need a moving picture and I’m entertained.

You can watch these cartoons now, Bobby’s World is on Netflix now, so they’re not hard to find.  But, you don’t want to, not really.  They’re not the same.  I just watched the intros for both the original Welsh cartoon series and the American ‘Further Adventures’—and… ‘Murica didn’t help things much.  I’m pretty sure the sidekick has space herpes and just roofie’d the poor bear.  Both intros are a little terrifying in that what the fuck is this and how did my parents let me watch th—Oh my god the bear just ripped his skin off!  How is that a superpower?!