Four years ago on December 17th, I received a message while I was out with some friends, from someone who had found this “Welcome to Cheektavegas” design on CafePress, where I had some designs up on glasses or water bottles or something. She asked if it was available as an art print and although it wasn’t at the time—I hadn’t had a chance to really get my Society6 page going—I asked her to give me an hour, at which point I raced home and worked on uploading the design.

I’d used Society6 for some other work I’d done, but only had my personal stuff up on CafePress and I hated (and still hate) the process there to upload designs on new products. Society6 was so much easier to use, even if there was a lot of resizing involved to meet each items pixel requirements and dimensions.

My shop wasn’t set up because I’d been dragging my feet a little on it; some of the designs weren’t ready or needed to be updated, cleaned up a little, or just weren’t good enough. I was figuring things out with Photoshop as I went, I’m amazed some of those early designs o came up with looked as good as they did. And I didn’t really think they looked that great, but it was the best I could do.

I was able to upload the design and message her back that it should show up shortly; I opened a beer, sat back and waited then for my first sale with Society6, the first $1.46 I earned on my own.

That would be the only money I made until the following September, but it was still pretty cool. That first year, I sold only three items. A few years and the Christmas season makes a big difference, since I sold three items today alone. And while I’m not selling massive amounts of stuff, usually enough a month to cover a tank of gas, I’m always going to be proud of what does sell, what people out there decide to buy, to bring into their homes or offer as gifts to the people in their lives. And I’ll always be grateful to that first customer who messaged me and got me moving.

And also a little terrified that my stuff is garbage. That’ll never change. 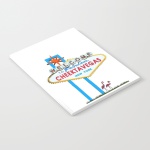 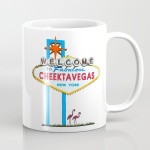