Out of the Void With William Hope Hodgson

It may have been during the first episode of The Vanishing at the Cecil Hotel that William Hope Hodgson’s occult detective Carnacki and the series of short stories he appeared in was mentioned.

This was before the documentary gave a little too much screen time to YouTube/podcast conspiracy theorists and deviated from genuinely interesting exploration of a mysterious disappearance and the creepy hotel where it happened, veering into that absurd faked moon landing Room 237 territory.

Or it may have been someone on Twitter who mentioned the stories, if I was scrolling while watching The Vanishing… because I can’t just let myself focus on one thing at a time anymore. I can’t find a tweet from anyone I follow about Carnacki from that time, although a couple authors have mentioned him before.

Whatever the trigger, the author’s name rang a bell. I remembered quoting him before. But I wasn’t familiar with what he’d written. Authors and titles all start to sound familiar after a while, and #gsbauthorquotes has only made the mountain of my to read pile even more dangerous to climb.

Maybe it’s been my recent interest in writing more horror or occult and supernatural themed stories, but the Carnacki stories in particular piqued my interest in a way they hadn’t a few years ago when I first quoted Hodgson.

I had to get a copy of the stories which were originally published in the illustrated magazine The Idler beginning in 1910 with “The Gateway of the Monster.”

In 1913, Carnacki, the Ghost-Finder was first published and included six tales. Three of the Carnacki stories were published posthumously, which led to debunked claims that two of them had been authored by August Derleth, the editor of the 1948 Arkham House edition. That edition was the first time all the Carnacki stories appeared together and further editions and collections have typically published all nine.

Hodgson was killed at the Fourth Battle of Ypres when struck by artillery fire. His death is recorded as either the 17th or 19th of April, 1918. Despite his sailing experience Hodgson had insisted on joining the Officer Training Corps and receiving a commission in the Royal Artillery. Reenlisting following a serious injury he returned to the front where he’d be killed.

That’s kind of how I ended up with this amazing, grotesque, pulptastic vintage paperback, or at least reading it now.

Since the exact date of Hodgson’s death in World War I is unknown—either April 17th or 19th—it seemed a good time to pull this one out and read a little.

Oddly, it begins with “The Thing Invisible” and not “The Gateway of the Monster” which was the first to be published. It seems “The Thing Invisible” was the last of the tales to be published in Hodgson’s lifetime, in 1912. When the single volume of stories was published a year later, this story was placed first, perhaps due to its popularity. Readers may have been more likely to recognize that title having just seen it in The New Magazine. That’s how the stories have generally been reprinted since, even with the addition of the three posthumous tales.

I’ve only read the first story so far, but it’s been enjoyable and I’m definitely slipping down the rabbit hole of adaptations and other works inspired by Hodgson’s occult creations.

Given how much of his writing built upon his years of experiences at sea, I’d love to read a fictional story about why he insisted on staying on land. A specter who chased him from the sea and eventually found him in Belgium. Or perhaps I’ve listened to The Magnus Archives’ episode “The Piper” about Wilfred Owen’s death in World War I too many times.

Even if that particular story doesn’t exist, I’m sure there are enough homages and adaptations beyond Hodgson’s original work to keep me entertained for a while.

Trying to Read “Hex and the City”

It’s been a couple years since my last visit to the Nightside, and that is the only factor I can think of to explain how disconnected I felt from Simon Green’s supernatural noir series when I jumped back into it with the fourth book, “Hex and the City”

I cannot imagine that the first three books were as poorly written as this one.  They couldn’t have been.  I wouldn’t have continued reading them.  Would I?  Ok, ‘poorly written’ may be unfair, but at the very least, this book was awkwardly written.

Was I struggling to get back into the world of John Taylor and the ‘Nightside’, or was Green struggling to remember how to write these characters himself? 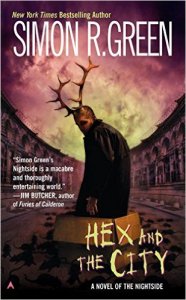 Halfway through the book, I glanced at the cover and saw that ‘Dresden Files’

author Jim Butcher had offered a quote.  If that had been on the cover of the first book in this series, I’m not sure I would have started it.  “Hex and the City” read very much like “Storm Front”

in that it felt more like a fan of supernatural stories trying to prove he’s a bigger fan than you and knows more about the topic than you do, than a coherent and well-written novel.  So, if you love Jim Butcher, by all means.

Paragraph long stretches of John Taylor speaking should have been adapted into descriptive expositional paragraphs. Perhaps they originally had been internal monologues in earlier drafts as multiple times Taylor would repeat something he had said half a chapter before to the complete surprise of the very characters he had spoken it to initially.

Too often, Taylor was supposed to be speaking to characters around him and interacting with them, but instead was stiff and spoke at them (or at the reader or just at anyone who had wandered by and might be listening).  He wasn’t a part of the scene and he wasn’t moving it forward. This wasn’t descriptive, this wasn’t storytelling. It was bullet points dressed up to look like a novel.

Detective fiction thrives on the smug, smartass private dick, but here, Taylor takes it to a level that brought to mind the fanboy writing style that turned me off the ‘Dresden Files’ after just one book.

The story picked up a bit towards the end and gave us a great answer to the question that’s been building since the first book.  But ultimately, I found myself turning the page, not to find out what would happen next, but just to finish the thing and move on to another book.

“Hex and the City” is the fourth book in this series, so I won’t give up on the whole thing just because this one disappointed.  There is an end to the ‘Nightside’ series, as Green finished it off with the 12th book, “The Bride Wore Black Leather”

. I’d love for him to get back to the page-turning, exciting, supernatural detective fiction that sucked me into this hidden world in the first place so I can see this series through to the end.

Jesse Ball and a Book Once Begun

I’m so behind.  My bookshelf has gotten out of hand over the last few months… several months.. ok, two years.  Maybe three.

, the first of Robert Parker’s ‘Jesse Stone’ books is among the oldest there (and since the Tom Selleck made-for-TV movies

have gotten to the point Selleck is co-writing original stories, I need to knock this one off the list), as well as Geoffrey Girard’s Project Cain

. ( I have the two-in-one paperback advanced reader from my Barnes & Noble days, try not to be jealous)  Those are the ones hanging on since 2013.  Yeah, I know, that’s ridiculous, but these things just kind of pile up, it’s nobody’s fault.  Or it’s Netflix’s.  I did have ten seasons of Supernatural

to catch up on, after all.

But, before I get rid of the offending titles of ol’ aught thirteen, I need to finish reading Jesse Ball’s Silence Once Begun

.  While there are always those authors whose list of titles grows without finding the time to step into their world (David Mitchell

is at the top of the list victims of my best literary intentions), it’s equally important to stay on top of authors one has already started reading.

With the exception of James Patterson

, who releases a new book every two weeks, this should be pretty easy to do.  And yet… I’m two novels and a novella behind on Jesse Ball.

I bought and started reading Silence Once Begun immediately upon its release but was distracted by Hugh Howey and Netflix and a miserable, unending Buffalo winter.  His next novel was released this past July, but I was a little preoccupied with being fired and forgot about buying A Cure for Suicide

It wasn’t until a week or so ago that someone on Goodreads added his new novella, “The Lesson

“, to their ‘Want to Read’ list that I realized how behind I had become.

I’m making progress however, I’ve finished off five books in the last month, two of which I’d been picked away at for several months.  At this rate, there’s a good chance Silence, Jesse Stone, and Cain could all be knocked off my nightstand within a week or two….