Double Spacing and the Legacy of Roy Hobbs 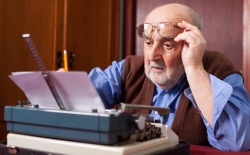 Somehow, a satirical article author Hugh Howey shared that I reposted on Gas Station Burrito Facebook and initially forgot all about became my most seen and commented on post pretty much ever. There’s about four people who regularly like things I post (and I’m one of them) so when the reach exceeds 1000 people and a few days later there are still comments popping up on it, that’s a pretty solid performance.

It seems to be a rather divisive topic too. Check out the original article and let me know what you think. Most of the comments were people asserting that they were, in fact, still alive, which I take to mean they are still double spacing after a period and take great offense to the author’s presumption all double spacers have died out with Roy Hobbs.

Personally, the double space as a habit pops up more so when I’m typing on a keyboard. Sadly, most of my writing these days is done on my phone simply as a matter of convenience.  I write in very, very short bursts when I can, since like most of you, I’m usually doing twelve other things. When I end a sentence therefore and hit the space bar twice on my phone, it will insert a period and single space before auto-capitalizing for next sentence. The old double space isn’t an problem for then, but if I’m typing on a keyboard, I’m constantly going back to delete unnecessary spaces.

And they are unnecessary.  There’s an entire Wikipedia entry devoted the history, evolution and misconceptions of the double space.  Its a riveting story; Amazon already bought the rights to it, so extra spacing should be exclusive to Prime members soon. You can debate it all you like, but despite your Facebook comments, civilized society has established the rules of the new world order of typesetting already. Quite a while ago, actually. According to the Complete Manual on Typography from 2003, “The typewriter tradition of separating sentences with two word spaces after a period has no place in typesetting” and the single space is “standard typographic practice”.

The Elements of Typographic Style from around the same time also advocates a single space between sentences. They also said, “your typing as well as your typesetting will benefit from unlearning this quaint [double spacing] Victorian habit”.

In the cutthroat world of typography that may be about as close to a mic drop as it gets.

So for anyone clinging to their double spaces, now you’ll have to adjust your monocle and yell, “Take that, Reginald!” every time you maniacally double space.

Despite the typographic mic drop and the fact that the Daily Mash article was a joke, (and that Roy Hobbs is not real) the debate over redundant spacing rages on and certainly isn’t limited to one grammatical/typographic quirk. Several people saw fit to drag the Oxford comma into it, although there’s no word on what Roy Hobbs had to say on that matter

For a limited time you can support a cause dear to Roy’s heart by purchasing your very own official Roy Hobbs’ commemorative  “Make America Double Spaced Again.” hat. 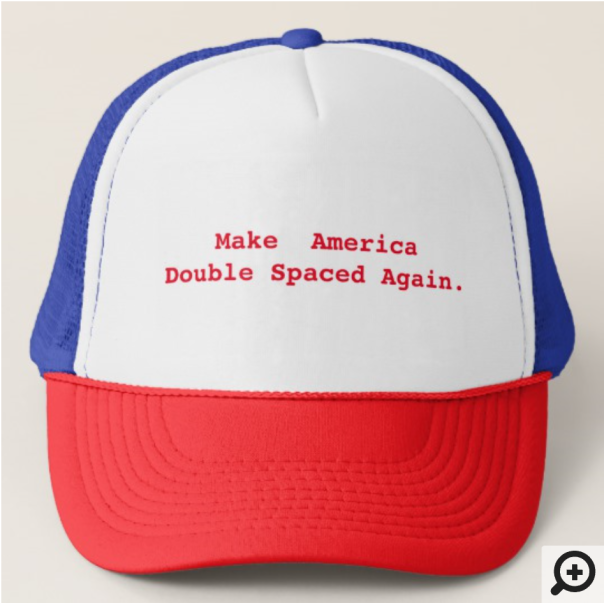 the Mystery of Charles E. Clarke

I rely on Wikipedia for a lot of things, but have learned use it only as a jumping off point.  The articles may give you a decent overview, but who hasn’t found contradicting information within one or hugely uninformative entries altogether?

That was the case when I decided to look into Forest Lawn.  I wasn’t looking for an extensive history and I didn’t need a book’s worth of information on its life story.  I needed just this much information how it came into being and the people involved in that. The Wiki article mentions that Forest Lawn was “founded in 1849 by Charles E. Clarke” and then mentions some notable graves.  OK, Wiki, let’s click on that and see just who is Charles E. Clarke?  Apparently an individual with no ties to Buffalo whatsoever, at least according to his article.

While Wiki mentions that Clarke practice law in Watertown (smallest city to have a park designed by Frederick Law Olmsted) and Great Bend; and that he served as a Whig Representative from New York in Congress beginning the same year he founded Forest Lawn, there was no mention of Buffalo.  Before Congress he’d served in the State Assembly from Jefferson County.  It says he was born in Connecticut, was educated at Yale and lived at the other end of Lake Ontario for the latter part of his life—what interest did he have with founding a cemetery in Buffalo, and one that he ultimately wasn’t even buried in?

I was about to fire off a quick email to a friend who knows a great deal of useless Buffalo architectural information along the lines of “Who the hell is Charles E. Clarke?” when common sense—and the more logical first step—dawned on me: why not see what Forest Lawn has to say about him?

So, to the History of Forest Lawn, which explained things a bit more.  It goes into the opening of the Erie Canal turning Buffalo into a thriving western outpost, the gateway to the west essentially, and with the introduction of Joseph Dart’s steam-powered grain elevator in 1842, the City becoming the “busiest grain-transfer point in the world, surpassing London, Odessa and Rotterdam.”

But Charles Clarke—focus.  He’s only described as a “Buffalo lawyer” but Buffalo is mentioned, so I suppose that’s a win?  Its something.

In The Dictionary of the United States Congress and the General Government complied back in the day by Charles Lanman, lists him only as a “Representative in Congress, from that state” (New York), but also as having been born in New York.  Not Connecticut?

So he was a Buffalo lawyer during the most successful period in the City’s history.  That’s cool.  Apparently he was also enamored with the Pére-Lachaise Cemetery in Paris and decided that Buffalo, with its growing reputation as a national commercial terminus and the literal boatloads of cash making their way into the City, would eventually need a similar resting ground.

Like its Parisian progenitor, Clarke’s cemetery was to be built outside the city— 2½ miles outside actually.  Think about that:  at the time he purchased the land that included rolling hills and bubbling streams, Forest Lawn was originally 2½ miles from the City of Buffalo.  Most of what lies within that area didn’t exist.

And while that doesn’t seem like a big distance, Delaware Park is less then two miles.

When was the last time you walked that?  You stopped halfway around didn’t you?  No, don’t pretend it was to look at the bison, you couldn’t even make it once around, could you?

City of Buffalo, 1849In 1832, North Street was the northern border of the City and it wasn’t until 1868 that the border was moved to Ferry Street and the first generation of mansions on what quickly became ‘Millionaire’s Row’ went up.  Even then, there was about a half mile between the northern edge of the City and Forest Lawn Cemetery.  Like the Pére-Lachaise, the city would soon develop around the cemetery, offering residents a reflective escape from the noisy city streets without having to travel miles to open country.

Clarke also found inspiration in Mount Auburn Cemetery in Massachusetts, which looked to Pére-Lachaise as well when it was established in 1831 as America’s first rural or garden cemetery.

All three sought to provide a rural cemetery that “encouraged people to walk the grounds, admire the funerary art, and commune with nature.”

His remains were moved to Forest Lawn in 1884, which probably explains why he looks so pissed.

In addition to Clarke’s work thinning out foliage on hilltops, adding more trees to the meadows, creating twisting roadways that at the time were considered absurdly wide, but intended to allow room for parking one’s carriage, he also instituted a policy of “providing interesting and appropriate sculpture to the natural setting of Forest Lawn.”

The first statue in the cemetery was of Red Jacket, celebrating his influence in establishing a relationship between the Seneca and US after the revolution, as well as fighting in the War of 1812 at the Battles of Fort George and Chippawa.  That statue was commissioned by personally by Clarke.

Today the cemetery features sculptures and monuments celebrating Presidents, industrialists, innovators and businessmen who made Buffalo their home and in doing so created the foundation the City was built on.

From its first inhabitant, Joseph Dart, to President and hospital namesake Millard Fillmore and George Birge of the Pierce-Arrow Motor Company, Louise Blanchard Bethune, the country’s first professional woman architect and designer of the Hotel Lafayette, and Albert James Myer, founder of the National Weather Service, the list of figures prominent both nationally and worldwide throughout history who made their homes and livelihoods in Buffalo is impressive.  And Rick James is there, too.

To paraphrase the Forest Lawn website, the cemetery serves both the living and the dead of the City as an outdoor sculptural chronicle of local history and accomplishment. And, according to Wikipedia, all thanks to a guy who had absolutely nothing to do with Buffalo.