Listening to Remade in America

Having been a guest on former Federal prosecutor Preet Bharara’s podcast, “Stay Tuned With Preet,” Bassem Youseff decided that if Preet could get a show from Cafe, so could he.

Bassem was a surgeon in Egypt who, during the Arab Spring, started a YouTube series to show what was really happening on the front lines of the protests. This grew in popularity until he was offered a TV show, and that grew in popularity until he was hitting 14 million viewers a week and being called the Egyptian Jon Stewart.  And until the government decided his humor and honesty was dangerous and tried to arrest him. He tells a hilarious story while speaking with Preet about being brought in for questioning by the authorities, and as much as I laughed at this, I can’t believe someone in the government  or a member of the pro-Islamist faction that also hated him, didn’t find some reason to execute him.

That’s the shorter, less funny version of how Bassem essentially had to flee to America, so definitely go and listen to his appearance on “Stay Tuned” when Preet went live at the Apollo theater, and then check out his new podcast, “ReMade in America.”

It’s the second episode of his show that made me stop what I was doing and really listen, as it seemed to be a convergence of multiple ideas and stories that had been circling me recently. In this episode, Bassem  speaks with Baratunde Thurston about controlling your own story, your narrative, and how the United States was essentially built on destroying an entire race’s ability to do just that. As George Orwell said, “The most effective way to destroy people is to deny and obliterate their own understanding of their history.”

As Baratunde begins to talk about that, about the history of slavery and the systemic, institutional racism that is the inoperable cancer of our nation, I was reminded of a passage by James Weldon Johnson that I came across the other day, that I believe comes from his book “The Autobiography of an Ex-Colored Man”.

“…but if the Negro is so distinctly inferior, it is a strange thing to me that it takes such tremendous effort on the part of the white man to make him realize it, and to keep him in the same place into which inferior men naturally fall.” 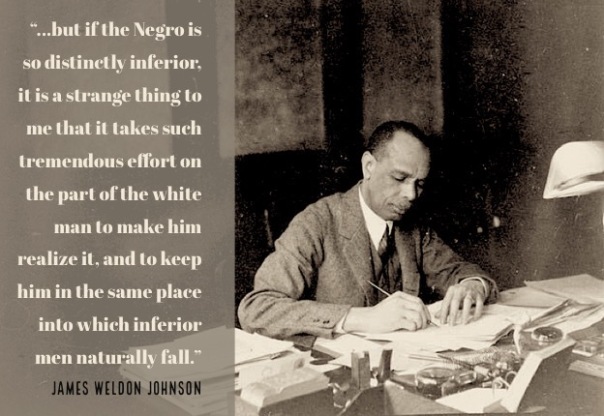